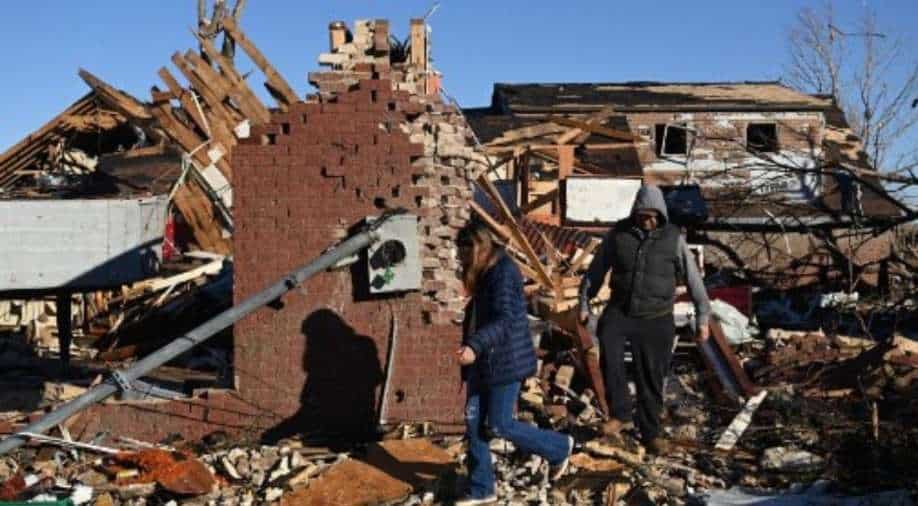 Kentucky Governor Andy Beshear said that the death toll is likely to rise in the state. Photograph:( AFP )

United Nations President Joe Biden has asked the government's agency Environmental Protection Agency (EPA) to find out whether the deadly tornadoes were caused by the climate crisis.

The latest information from the US authorities confirmed that the death toll in the worst-affected state Kentucky stood at 64 on Monday (December 13). At least 14 people were killed in four other US states

Kentucky Governor Andy Beshear said, "There will be more. We believe it will certainly be above 70, maybe even 80."

IN PICS | Tornadoes in US: Before and after satellite images show massive destruction

Biden also confirmed that he will visit Kentucky on Wednesday (December 15) to survey the damage. It has been conveyed by the White House that Biden would travel to Fort Campbell, Kentucky, for a storm briefing, and Mayfield and Dawson Springs, Kentucky.

When the initial damages were reported, Biden had asked EPA to find whether climate crisis has played a role in the devastating tornadoes.

"The specific impact on these specific storms, I can't say at this point. I'm going to be asking the EPA and others to take a look at that," Biden said in a briefing.

He added, "But the fact is that we know everything is more intense when the climate is warming. And obviously, it has some impact here."

Victor Gensini, a professor in geographic and atmospheric sciences at Northern Illinois University said that unusually high temperatures and humidity created the environment for such an extreme weather event at this time of year.

In recent years, analysts have been working to find out the links between an increase in global temperatures and how it is becoming a catalyst for the rising intensity of unseasonal severe weather events.