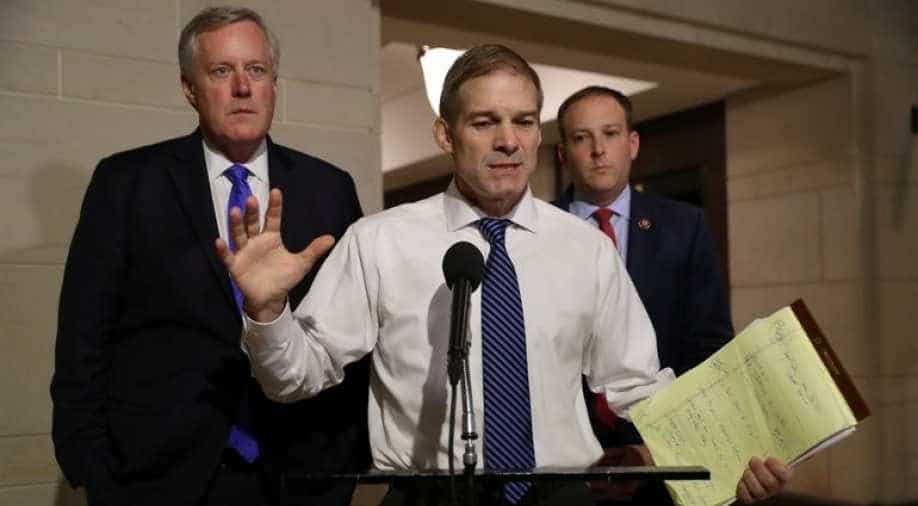 The Democratic-led United States House of Representatives' impeachment enquiry against President Donald Trump on Tuesday questioned George Kent, a US career diplomat who has spent much of his career fighting corruption in Ukraine and elsewhere.

The probe is focused on a July 25 phone call in which Trump pressed Ukrainian President Volodymyr Zelenskiy to investigate unsubstantiated allegations against former Vice President Joe Biden, a top contender for the Democratic nomination to challenge Trump in the 2020 presidential election, and Biden's son, Hunter Biden.

The younger Biden, 49, denied doing anything improper in past work for a Ukrainian energy company, in an interview with ABC News that aired on Tuesday.

But he expressed regret that his association with the Burisma Group gave "some very unethical people" an opening to "to act in illegal ways to try to do some harm to my father. That's where I made the mistake."

Kent, a deputy assistant secretary of state responsible for US policy toward six former Soviet republics including Ukraine, arrived on Capitol Hill wearing a red bow tie and ignored shouted questions from reporters.

Kent appeared after receiving a congressional subpoena after the State Department directed him not to testify, an official involved in the impeachment inquiry said.

His appearance comes one day after Trump's former Russia adviser, Fiona Hill, gave three House committees conducting the impeachment inquiry details of a high-level meeting between US and Ukrainian officials that included her then-boss, former national security adviser John Bolton, and Gordon Sondland, the US ambassador to the European Union, according to a person familiar with the testimony.

Hill recounted that Sondland raised the issue of investigations and that she and Bolton became alarmed that he was referring to the investigation into the Bidens, the person said. The pair left the meeting and Bolton advised her to consult with John Eisenberg, the top NSC lawyer.

The New York Times reported that Bolton was similarly troubled by activities toward Ukraine being coordinated by the president's personal lawyer, Rudy Giuliani, along with other administration officials.

"Giuliani's a hand grenade who's going to blow everybody up," Hill quoted Bolton as saying, according to the newspaper.

A Bolton spokeswoman said he would have no comment on the testimony.

Democrats have accused Trump of pressuring a vulnerable US ally to dig up dirt on Biden after withholding $391 million in US security aid intended to help combat Russian-backed separatists in the eastern part of Ukraine. Zelenskiy agreed to investigate. Trump eventually allowed aid.

Gordon Sondland, the US ambassador to the European Union, is due to testify later in the week, in response to a congressional subpoena.

Giuliani, a former New York City mayor, faces a Tuesday deadline to produce documents related to the Ukraine matter subpoenaed by the House Intelligence Committee. He has not said whether he will comply.

On Friday, Marie Yovanovitch, the former US ambassador to Ukraine, defied a State Department order to refuse to cooperate with the House probe, giving scathing testimony in which she accused the Trump administration of recalling her from Kiev-based on false claims.

According to State Department emails contained in a package of material shared with congressional staff last month and later seen by Reuters, Kent told colleagues that Yovanovitch had become the target of a "classic disinformation operation."

Yovanovitch in her Friday appearance denied Giuliani's allegations that she provided a "do not prosecute list" to Ukrainian officials to protect Biden and others.

"One key sign of it being fake is that most of the names are misspelt in English, we would never spell most that way," Kent said in the email to colleagues.

Kent suggested the department push back by "circling in red all the misspellings and grammar mistakes and reposting it," as the US Embassy in Moscow has done to counter propaganda.

Kent, who majored in Russian language and literature at Harvard, has held several jobs requiring him to grapple with corruption in Ukraine, which ranks 120th of 180 nations in a Transparency International corruption perceptions index.

Before taking up his current job, Kent served as the deputy chief of mission at the US Embassy in Kiev from 2015 to 2018 and as the senior anti-corruption coordinator in the State Department's European Bureau from 2014 to 2015.

One former US official said Kent had been among the most vigilant officials within the State Department in reporting on corruption in Ukraine and in seeking to combat it.