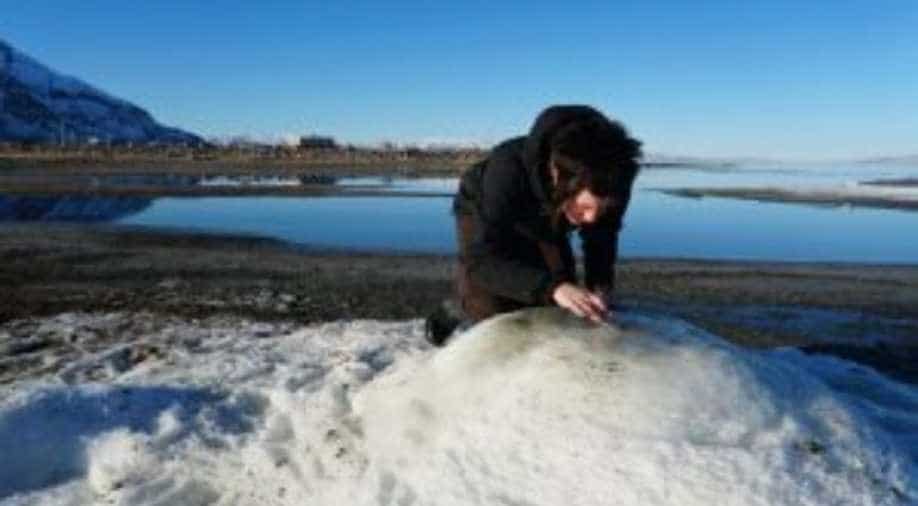 Unique salt formations in Utah being inspected a geologist Photograph:( Others )

Their discovery at this place is highly unusual and has never been documented before.

Four rare salt formations have been discovered on the shores of the Great Salt Lake for the first time that can provide an insight into salt structures found on Mars.

They were discovered by Park Rangers and Geologists and after investigation, it was found that the mounds of salt were ''mirabilite'' also known as Glauber's salt.

Guided tours of the mirabilite mounds were offered to the public on January 11 and 12 by the staff at the lake.

According to researchers, they are special because its precipitation can serve as analogues for conditions similar to that of Mars.

They approximately 3 feet tall and are spread over several yards.

Their discovery at this place is highly unusual and has never been documented before.

They were found previously only in a few places across the globe, primarily in the Arctic and other polar regions due to the constant cold temperature of that place.

A rare geologic wonder on the Great Salt Lake!

Mirabilite mounds are rare and have never been documented at the Great Salt Lake. They have only been found at a few locations around the world - primarily in the Arctic.

The reason behind their sudden appearance is the exposed shoreline due to the lowered water levels caused by droughts and water diversion at the largest natural lake of the west of Mississipi.

According to Richard Socki, a NASA geochemist, ''the Glauber's salt is created from the water that bubbles up from the underground''.

Also read: Australian bushfire smoke will take a 'full circuit' and return to the nation: NASA

''The expanded shorelines along with the highly saline water of the lake means an increment in the number of places for water to bubble up from warm, sulphate-rich springs to the surface,'' he also added.

The flat terraces have been created over a period of the last few months by the concentration of tiny crystals at an individual place.