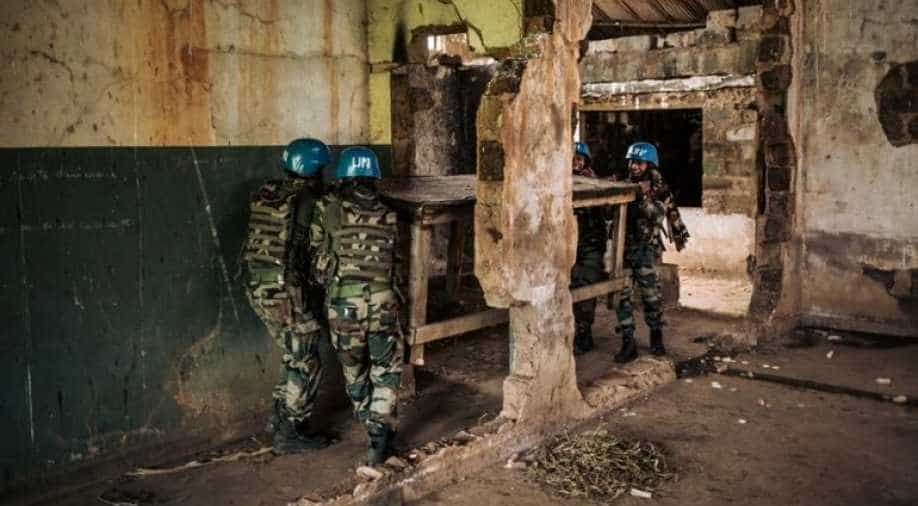 The report comes as 10 civilians were killed in an attack in the eastern Democratic Republic of Congo blamed on an Islamist-rooted armed group based in Uganda.

U.N. peacekeepers should progressively withdraw from DR Congo by the end of 2022 at the earliest, a strategic review said Wednesday, in the first tentative timeline to exit a country grappling with militia violence and Ebola.

The report comes as 10 civilians were killed in an attack in the eastern Democratic Republic of Congo blamed on an Islamist-rooted armed group based in Uganda, as the army launches a sweeping offensive against militancy that has plagued the troubled region for nearly a quarter of a century.

The United Nations's MONUSCO mission to the country, one of its biggest deployments encompassing some 16,000 peacekeepers, began two decades ago and has an annual budget of over $1 billion.

Its latest mandate comes to an end on December 31 and the decision to renew is made the U.N. Security Council.

A review for the Council said that the "timeline for an exit of MONUSCO should be an absolute minimum of three years", in an assessment of the U.N. presence in the country in the wake of the election of new President Felix Tshisekedi.

"With a departure at the end of 2022, the U.N. would be in a better position to ensure a responsible transition, if the reforms announced by the new authorities remain on track and the conditions for the best-case scenario materialise," the report said.

It noted, however, that there should be "red lines" that would cause the withdrawal to be paused and suggested a political mission to help "prevent a resurgence of conflict".

During a visit to eastern Beni in September, U.N. chief Antonio Guterres stressed his support for extending MONUSCO's mandate beyond the year-end and said a strategic review would help make the mission "more useful still to the Congolese people" in terms of security but also politically.

"We will do everything to bring an end to the scourge of insecurity," he said.

The DR Congo army announced last week that it had launched "large-scale operations" against armed militias in the country's troubled east.

In the most recent violence, members of the Allied Democratic Forces (ADF) crossed the border from Uganda late on Tuesday and "killed 10 civilians, some with knives and others with firearms," in the locality of Kokola, Donat Kibwana, a local administrator in the restive Beni region, told AFP.

An army spokesman in the region, Major Mak Hazukay, said the ADF were "cornered" by army fire.

"That's why they try to cause terror among the population," he told AFP, declining to give a casualty toll for Tuesday's attack.

The impoverished central African country has been wracked by conflict near its eastern border, with many of the militias have evolved from the two Congo wars (1996-1997 and 1998-2003).

The Islamist-rooted ADF, which arose in western Uganda in 1995, has targeted Beni, killing hundreds of civilians over the last five years.

But there are also home-grown militia and other armed groups, some 130 roam the North and South Kivu provinces of DR Congo, a vast country the size of western continental Europe.

The U.N.'s peacekeeping mission in DR Congo has supported DRC troops in the region, but has ruled out backing any foreign intervention.

The Beni region, in the North Kivu province which borders Uganda and Rwanda, has been particularly affected by militia violence.

Beni is also stricken by the country's Ebola outbreak, which has killed more than 2,000 people in a year, two-thirds of those infected.