Ukraine crisis: At UNSC, US and Russia accuse each other of drumming up ‘war’ hysteria 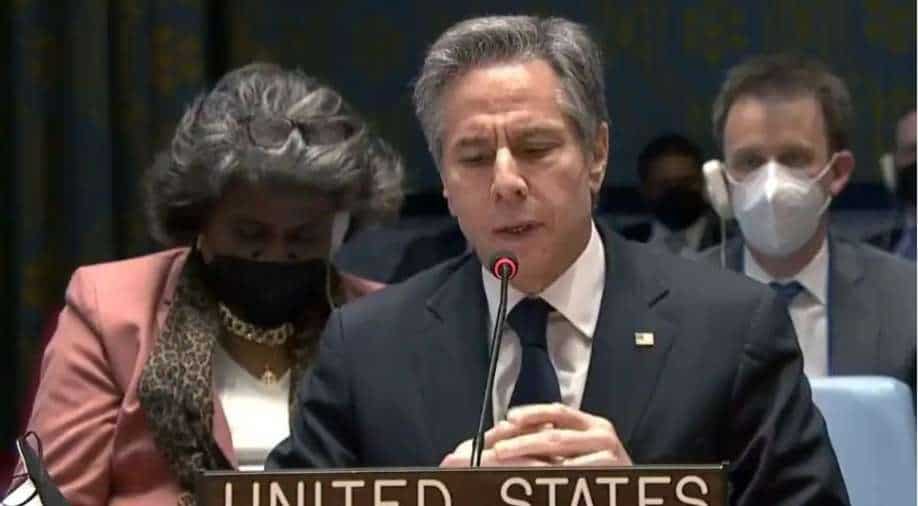 Russia hit back at US saying that West was responsible for the ongoing tensions between Russia and Ukraine, adding that it wants a "war” with Moscow

The United States on Thursday informed the members of the United Nations Security Council (UNSC) that Russia is finding ways to attack Ukraine, adding that over 150,000 Russian troops manning borders are preparing to attack its neighbour.

Addressing the diplomatic meeting on the Ukraine crisis, US Secretary of State Antony Blinken said that Moscow is on the precipice of launching a war.

“As we meet today, the most immediate threat to peace and security is Russia's looming aggression against Ukraine,” Blinken said.

“Russia says it's drawing down those forces. We do not see that happening on the ground. Our information indicates clearly that these forces including ground troops, aircraft, ships are preparing to launch an attack against Ukraine in the coming days,” he added.

Blinken said Russia has already “identified and mapped out in detailed plans” targets that it plans to advance on if Moscow decides to launch a military invasion of Ukraine.

“This crisis directly affects every member of this Council and every country in the world because the basic principles that sustain peace and security, principles that were enshrined in the wake of two world wars and a Cold War, are under threat,” he said.

He urged urges Russia to “abandon path of war” against Ukraine and to choose a different path “while there's still time.”

During his speech, Blinken invited Russian Foreign Minister Sergei Lavrov to meet in Europe 'next week' over Ukraine crisis.

Also read | The West must not be fooled by Russia's claims: UK Foreign Secretary Liz Truss

Russia hit back at US saying that West was responsible for the ongoing tensions between Russia and Ukraine, adding that it wants a "war” with Moscow.

"The only goal of the West is to organise a war. If this is not the case, then the puppet govt of Ukraine would have been compelled to implement the Minsk agreement a long time ago. Since this is not taking place, we can state that the West wants a war with Russia", it said at UNSC.