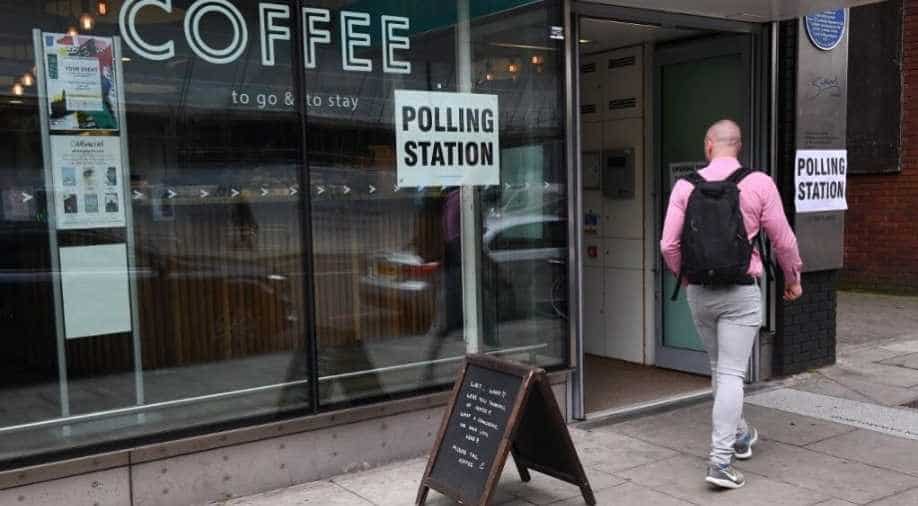 A man enters a library and coffee shop on Borough High Street set up as a polling station in London. Photograph:( AFP )

'I've been living in Balham, London for 6 years, I have never seen a queue like this at my polling station,' a voter said on Twitter.

To decide the future of Brexit, voters across the United Kingdom went to the polls on Thursday to cast their vote in the third general election in less than five-years.

Soon after the polls were opened, large queues were formed outside the polling venues. Interestingly among the voters, large numbers of young voters were seen standing in the queues to vote for their leader despite the freezing weather.

According to a report by UK daily, almost a third of people who registered to vote are under 25. It is expected that young voters could play a critical role in this general election.

"I've been living in Balham, London for 6 years, I have never seen a queue like this at my polling station," Aidan Conway wrote on Twitter.

@BBCNews I've been living in Balham, London for 6 years, I have never seen a queue like this at my polling station. pic.twitter.com/JCjVdeGruo

"First time in 20 years that I've seen a queue at my polling station," Sue Christoforou tweeted.

First time in 20 years that I’ve seen a queue at my polling station. pic.twitter.com/PddeJ12i19

Another voter tweeted "Massive queues, feeling hopeful. Could be Brexiters but a lot of those queues seem to be young voters."

Massive queues, feeling hopeful. Could be Brexiters but a lot of those queues seem to be young voters #GeneralElection2019 #YouthQuake #TimeForChange pic.twitter.com/o2ApPx9a2w

In the past, long queues have been a rare sight in general elections in the UK.

UK daily The Guardian reported citing a research that, "Only 2% of poll workers reported a problem with queues at the 2018 and 2019 local elections, while 6% reported problems at the 2015 general election."

Meanwhile, people on social media as well encouraged registered voters to vote for their leaders.

Voters went to the polls on Thursday in an election that will pave the way for Brexit under Prime Minister Boris Johnson or propel Britain towards another referendum that could ultimately reverse the decision to leave the European Union.

After failing to deliver Brexit by an Oct. 31 deadline, Johnson called the election to break what he cast as political paralysis that had thwarted Britain's departure and sapped confidence in the economy.

Polls opened at 0700 GMT and will close at 2200 GMT when an exit poll will give the first indications of the result. Official results from the bulk of the United Kingdom's 650 constituencies begin to come in from 2300 GMT to 0500 GMT.