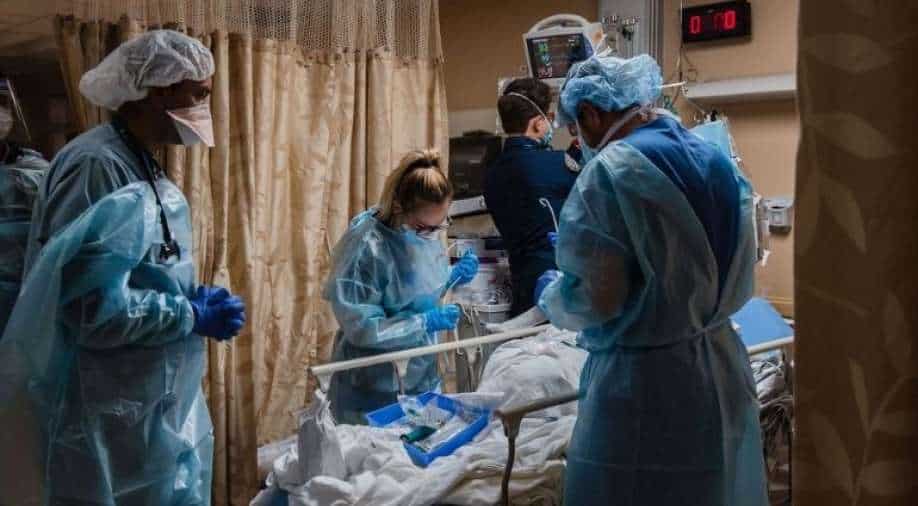 In this file photo, doctors can be seen with a patient infected with the coronavirus disease in London Photograph:( Reuters )

UK government advisers have recommended against giving a fourth dose of COVID-19 vaccine to nursing home residents and people over 80 because data shows that a third shot offers lasting protection against admission to the hospital.

In a milestone for one of the worst affected countries in Europe, the deaths in the United Kingdom due to coronavirus topped 150,000 on Saturday.

The government reported that deaths within 28 days of a positive Covid test had reached 150,057 since the start of the pandemic. Russia is the only European country with a higher death toll.

The UK is racing to offer booster shots to adults across the country after research showed that two doses were not enough to protect people from Omicron.

Britain has seen a surge of cases linked to the Omicron variant of COVID-19 in recent weeks, though death rates have been lower than during previous waves of the disease.

Meanwhile, Britain's health secretary Sajid Javid was challenged by a doctor during a visit to a London hospital, who told him that the science was "not strong enough" to justify rules that health workers must be vaccinated.

The British government wants all National Health Service (NHS) staff who have direct contact with patients to have their first vaccination by February 3. If staff fail to comply, they risk losing their job.

When speaking to staff at King's College Hospital Javid asked staff what they thought of the new rules, consultant anaesthethetist, Steve James spoke up. He told the minister that he did not want to get the vaccination, and that he already had antibodies from contracting COVID-19.

Two years into a pandemic, its state-run health service was already facing a morale and staffing crisis even before the recent surge in Omicron.

The report said that the staffing crisis could derail efforts to catch-up with record waiting lists for elective treatment caused by COVID-19 disruption.

Rising staff absences at UK hospitals have already prompted the military to provide backup to beleaguered doctors and nurses.

More than 39,000 staff members at hospitals in England were off work for reasons related to COVID-19 on January 2, up 59 per cent from the previous week, according to NHS England.

UK government advisers have recommended against giving a fourth dose of COVID-19 vaccine to nursing home residents and people over 80 because data shows that a third shot offers lasting protection against admission to the hospital.

For people over 65, protection against hospitalisation remains at about 90 per cent three months after the third dose, according to data compiled by the UK Health Security Agency.