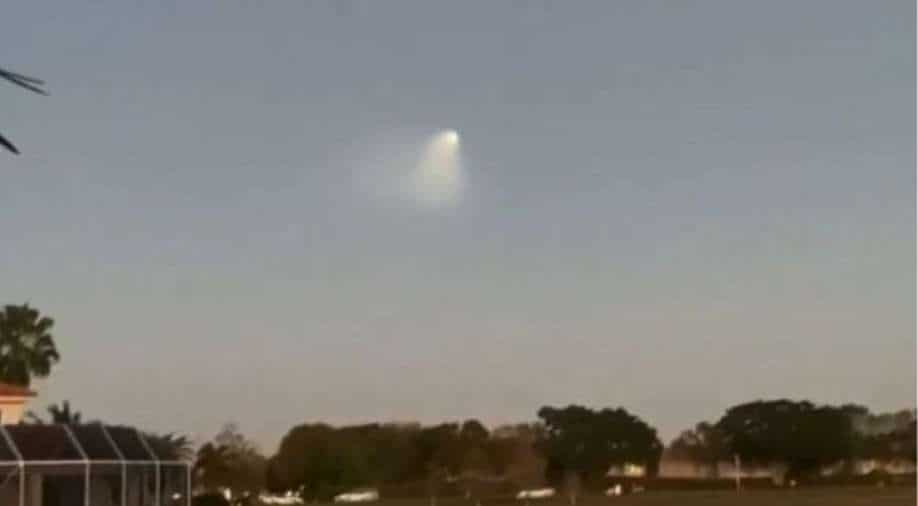 Eric Vandernoot, an astronomy and physics lab coordinator at Florida Atlantic University, highlighted the altitude of the object in the sky made it possible that the UFO-resembling object was visible from the Bahamas to Florida

A strange object resembling a UFO or Unidentified Flying Object was spotted in Florida on Wednesday sparking several theories about aliens finally making contact with the Earth.

#Mysterious object in the sky over South #Florida tonight. Getting many calls and emails. Around 6:30pm. This video is looking east from Brian Goodale in #HobeSound. Even seen in the Bahamas pic.twitter.com/vuBvJHVMjg

This looks like a rocket launch tonight, but I don’t see any scheduled🤷🏻‍♂️ am I missing something? What is it? Video from Brian Goodale in Hobe Sound around 630pm #florida #ufo @spacex @alexhbrock @SuperclusterHQ @marcuscotephoto @LaunchPhoto @SpaceXNow @nasa pic.twitter.com/rsNwIutyw3

The '#UFO' seen from the #Florida coast today, was a #Trident-II SLBM (Submarine Launched Ballistic Missile) test. The launch occured from a submarine in the Atlantic.
See my blog post from two days ago here:https://t.co/rlw0dqWuiO

Eric Vandernoot, an astronomy and physics lab coordinator at Florida Atlantic University, highlighted the altitude of the object in the sky made it possible that the UFO-resembling object was visible from the Bahamas to Florida.

More spectacular photos of the #TRIDENT-II #SLBM Missile Test this evening, this time from the Turks and Caicos.

Got photos you want to share? Send them to me!

When Former US President Donald Trump had signed the $2.3 trillion coronavirus relief bill into law in December last year, he also set into motion a 180-day countdown for the authorities to reveal all they know about UFOs, or perhaps aliens.

Also read| Black Vault: CIA allows all UFO information to be downloaded ahead of deadline

As part of this, the Director of National Intelligence, along with the Secretary of Defense have less than six months to provide an unclassified report about "unidentified aerial phenomena" to the congress and committees of armed services.

The authorities have to reveal the information as part of the section in the Intelligence Authorization Act for 2021, which is a constituent provision of the spending bill.

The documents can now be accessed by downloading from the Black Vault website. The website Black Vault is being run by John Greenewald Jr. The data involves every instance of Unidentified Aerial Phenomena (UAP) which has been mapped by the US government.

Getting documents released is one thing. But later getting the redacted material reviewed for further release? That's another beast all together.

I've done hundreds of those requests, and with #UFO records, a lot of them are just... "lost."