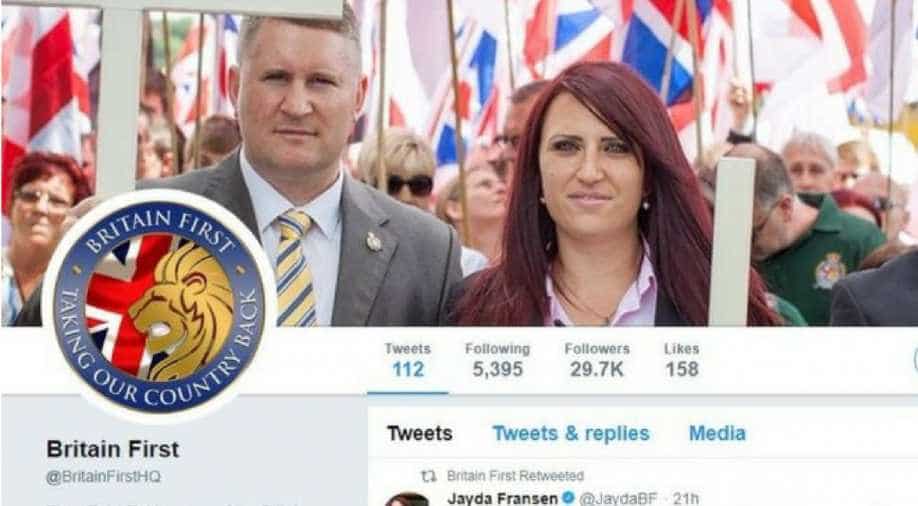 Paul Golding, Britain First's leader, and Jayda Fransen, his deputy, can no longer tweet and their past posts no longer appear. Photograph:( Twitter )

Twitter has revised its rules on hate speech after the platform was criticised continually throughout the year for not doing enough to protect those targeted by abuse and hate speech.

In a first, it has suspended the accounts of two leaders of a British far-right group -- Paul Golding, Britain's First leader and deputy Jayda Fransen, as they allegedly posted anti-Muslim videos.

The suspension came on Monday after the social network’s new rules came into effect.

Paul and Jayda can no longer tweet and their past posts no longer appear. Their organisation's official Twitter page has also been suspended with no access to previous tweets to users.

Twitter suspended their accounts after their posts feature anti-Islam videos that created a furore on the internet.

It came to the knowledge of people more when US President Donald Trump shared these tweets in November.

The strict action comes after Twitter announced in October that it planned on taking a tougher stance against hate symbols as well as those who posted messages that glorified or condoned violence.

It is also stated that those who express an affiliation with groups that use or celebrate violence to achieve their aims will be permanently suspended.

According to the guidelines, hateful imagery such as the Nazi swastika can still be posted, but will initially be hidden behind a "sensitive media" warning, that visitors must disable to proceed. However, such content will no longer be allowed on a person's profile page. Those who feature these on their profile will be asked to remove and repeat violators will be banned.

In a statement, Twitter said, "The move would reduce the amount of abusive behaviour and hateful conduct on the network. If an account's profile information includes a violent threat or multiple slurs, epithets, racist or sexist tropes, incites fear, or reduces someone to less than human, it will be permanently suspended. We plan to develop internal tools to help us identify violating accounts to supplement user reports."