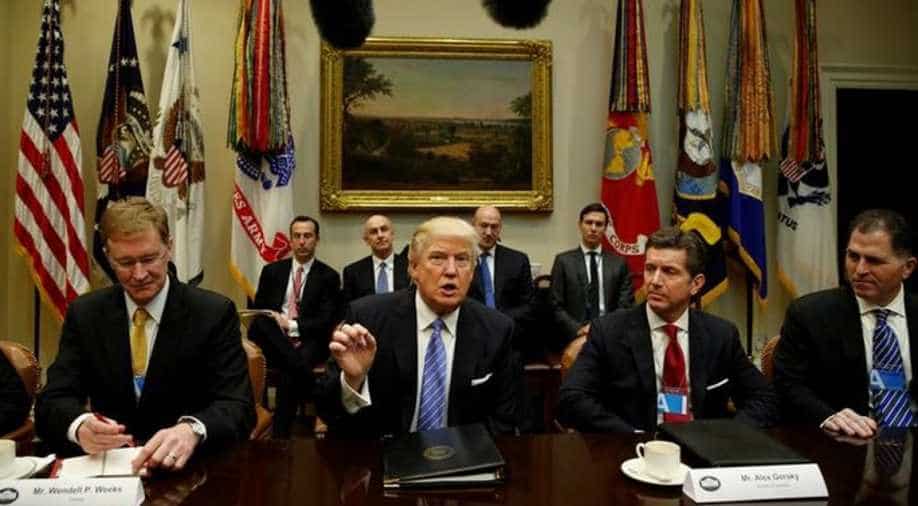 President Trump wants Mexico to pay for the wall on the US-Mexico border. Photograph:( Reuters )

US president Donald Trump’s executive order has sparked widespread protests in not only in the United States, but around the world. So what is the Trump order all about?

On Friday, Trump signed an executive order imposing an indefinite ban on Syrian refugees from entering the United States.

The executive order also suspended all refugee admissions for 120 days. Suspension from entry was also imposed on citizens from Iran, Iraq, Libya, Somalia, Sudan, Syria and Yemen from entering the United States for 90 days.

White House Chief of Staff Reince Preibus has said border patrol agents could question US citizens coming from the seven banned countries. Similarly, cases of green card holders will be considered on a case-by-case basis.

This order has left several travellers around the world stranded, as protests continue to swell across the United States.The executive order was challenged by the American Civil Liberties Union, leading to a halt on a part of Trump’s immigration ban.

President Trump, since then, has come out in defence of his order.

But, the Trump administration is showing no signs of slowing down. White House Chief of Staff Reince Priebus has hinted that more countries could be added to the immigration ban.

The situation on the ground

Massive crowds have been gathering outside the Atlanta airport protesting the ban on entry of immigrants.Protest rallies were also carried out inside the airport premises. Reports say some protesters tried to enter the baggage claim area but were stopped.

Citizens continue to protest the streets of New York. The First Lady of New York City took to twitter to express her support.

This is New York City. We will always fight to protect our people. #NoBanNoWall pic.twitter.com/AKaYB3jgRZ

The John F. Kennedy International Airport continues to remain at the center of the action. Lawyers continued to work pro-bono to free remaining detainees.They even have opened up a social media bureau to reach out to more people to offer help and legal assistance to travelers.

Seattle saw massive protests against the immigration ban. Citizens took to the streets in large numbers. Reports say at least 13 detainees were released, as protests continued in the West Lake Part area.

In San Francisco, crowds gathered at the arrivals to make their voices heard against the immigration ban order by the Trump administration. But the protests took a brutal turn, and locals recorded policemen using force.

What the law says

An executive order is a statement by the President of the United States, declaring the policy of a government. They derive their power from Article II of the American constitution.

The executive order is a legally binding document, recorded into the official journal of the government and federal register.

A president can use an executive order to overturn any previous orders issued by the previous president. But they cannot reverse laws passed by the United States Congress.

So how can one overturn Trump’s executive order on immigration? By challenging it in court. And this one is clearly headed for a Supreme Court battle.

Executive orders have been overturned by courts before. In recent times, Obama's executive action to block deportation of five million immigrants was blocked by the Supreme Court.

Opponents argue Trump’s order violates the Fifth Amendment right of due process. Further, the order gives preference to Christians, which could mean a violation of the First Amendment on freedom of religion.

But for now, the public outcry is good enough to express the sentiment against the immigration ban.