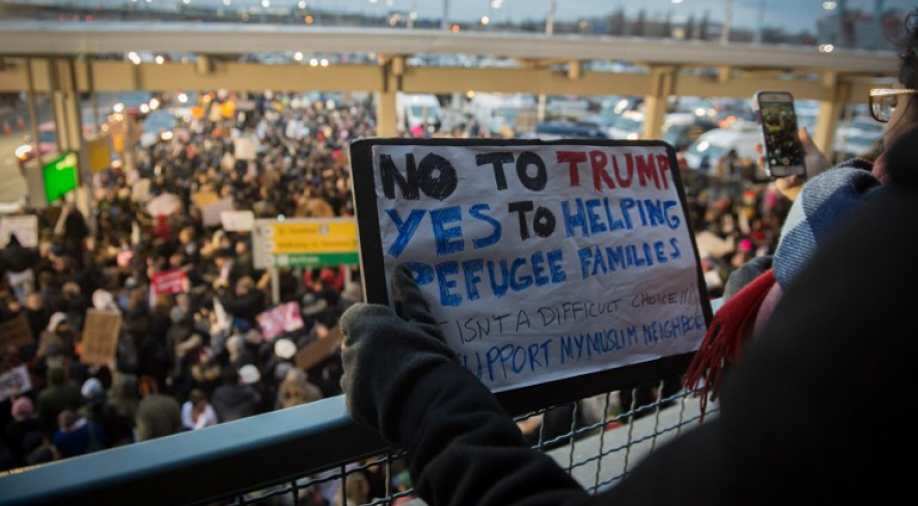 People protest at JFK International Airport. The American Civil Liberties Union filed for the temporary stay said it would help 100 to 200 people with valid visas or refugee status who found themselves detained in transit or at US?airports. Photograph:( AFP )

A US federal judge blocked part of President Donald Trump's immigration ban, ordering authorities to stop deporting refugees and other travellers stuck at US airports.

Trump had signed an executive order restricting people from seven Muslim-majority countries for the next three months and the arrival of refugees for at least 120 days.

The American Civil Liberties Union, which sought the temporary stay, said it would help 100 to 200 people with valid visas or refugee status who found themselves detained in transit or at US airports after Trump signed the order late on Friday.

Final word: Judge issued stay on Muslim ban, said no one could be removed/sent back. But unclear what will happen to those detained.

The exact number of those affected is unclear, but Donnelly ordered the government to provide lists of all those detained at US airports since the measure went into effect.

Donnelly said sending travellers back to their home countries following Trump's order exposes them to "substantial and irreparable injury."

"Our courts today worked as they should as bulwarks against government abuse or unconstitutional policies and orders," the American Civil Liberties Union said.

The emergency court ruling was cheered at Boston's Logan International Airport, one of the several major US airports where protesters angry with Trump's order gathered.

German Chancellor Angela Merkel on Sunday condemned the restrictions on immigration imposed by Trump, seeing them as unjustified, her spokesman said.

"She is convinced that even in the necessarily resolute battle against terrorism it is not justified to place people from a certain origin or belief under general suspicion," Steffen Seibert was quoted as saying by national news agency DPA.

British Prime Minister Theresa May does "not agree" with the restrictions on immigration.

"But we do not agree with this kind of approach and it is not one we will be taking. If there is any impact on UK nationals then clearly we will make representations to the US government about that."

Silicon Valley heads have also slammed Trump's ban on immigration,  fearing it could prevent them from accessing a global reservoir of talent.

"Apple would not exist without immigration, let alone thrive and innovate the way we do," said Tim Cook in a memo to staff obtained by AFP.

Netflix CEO Reed Hastings called the president's first week in office "very sad", saying in a Facebook post that "Trump's actions are hurting Netflix employees around the world, and are so un-American it pains us all".

"It is time to link arms together to protect American values of freedom and opportunity."

Nearly 200 Google employees are directly impacted by the measures, according to an internal memo from CEO Sundar Pichai.

"We're concerned about the impact of this order and any proposals that could impose restrictions on Googlers and their families, or that could create barriers to bringing great talent to the US," said the head of the internet giant.

Meanwhile, Iran has said that Americans who already hold Iranian visas can enter the country, even though Tehran has vowed to respond in kind to a US ban on visitors from Iran and six other Muslim countries.

"Unlike the US, our decision is not retroactive. All with valid Iranian visa will be gladly welcomed," Iran's foreign minister Mohammad Javad Zarif said on Twitter.