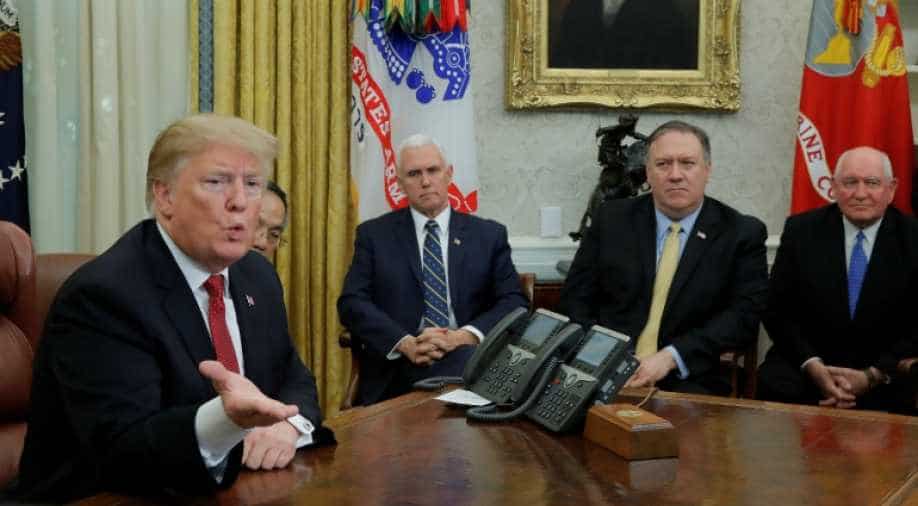 No specific plans for a meeting with Xi were announced, but Trump said there could be more than one meeting.

US President Donald Trump said on Thursday he will meet with Chinese President Xi Jinping soon to try to seal a comprehensive trade deal as Trump and his top trade negotiator both cited substantial progress in two days of high-level talks.

Trump, speaking at the White House during a meeting with Chinese Vice Premier Liu He, said he was optimistic that the world's two largest economies could reach "the biggest deal ever made."

No specific plans for a meeting with Xi were announced, but Trump said there could be more than one meeting. The US Trade Representative Robert Lighthizer and Treasury Secretary Steven Mnuchin were invited to bring the US negotiating team to Beijing around mid-February, with dates still pending.

At the end of two days of high-level talks next door to the White House, Liu told Trump that China would make a new, immediate commitment to increase soybean purchases. An administration official later clarified the amount as a total of 5 million tonnes, effectively doubling the amount bought by China since resuming limited purchases in December.

The US soybean sales to China, which totalled 31.7 million tonnes in 2017, were largely cut off in the second half of last year by China's retaliatory tariffs and the announcement drew a positive reaction from Trump, who said it would "make our farmers very happy."

While China has offered increased purchases of US farm, energy and other goods to try to resolve the trade disputes, negotiators dug into thornier issues, including the US demands that China take steps to protect American intellectual property and end policies that Washington says force US companies to turn over technology to Chinese firms.

The US Trade Representative Robert Lighthizer said there was "substantial progress" on these issues, including verification mechanisms to "enforce" China's follow-through on any reform commitments it makes.

"At this point, it's impossible for me to predict success. But we're in a place that if things work out, it could happen," Lighthizer said at the Oval Office meeting.

Later, he told reporters that the US objective was to make China's commitments "more specific, all-encompassing and enforceable" with a mechanism for taking action if China fails to follow through, but declined to provide specific issues.

Reuters previously reported that such an enforcement mechanism would involve a snap-back of US tariffs.

Asked whether the two sides discussed lifting US tariffs on Chinese goods, Lighthizer said tariffs were not part of the talks.

A person familiar with the discussions said a broad range of concerns about access to Chinese agricultural markets were raised in the talks but little progress was made.

The White House said in a statement that a scheduled March 2 tariff increase on $200 billion of Chinese goods to 25 per cent from 10 per cent was a "hard deadline" if no deal was reached by March 1.

Trump said he did not think he would need to extend the deadline. "I think when President Xi and I meet, every point will be agreed to," Trump added.

But Trump has vetoed multiple proposed trade deals with China, choosing to push ahead with tariffs on Chinese goods to gain leverage. Earlier, Trump said on Twitter he was looking for China to open its markets "not only to Financial Services, which they are now doing but also to our Manufacturing, Farmers and other US businesses and industries. Without this, a deal would be unacceptable!"

The US complaints on technology transfers, and intellectual property protections, along with accusations of Chinese cyber theft of American trade secrets and a systematic campaign to acquire US technology firms, were used by Trump's administration to justify punitive tariffs on $250 billion worth of Chinese imports.

China has retaliated with tariffs of its own, but has suspended some and is allowing some purchases of US soybeans during the talks.

Chinese officials have said their policies do not coerce technology transfers.

The US tariffs on Chinese goods are just one front in Trump's efforts to upend the global trading order with his "America First" strategy. He has also imposed global tariffs on imported steel and aluminium, washing machines and solar panels and has threatened to raise tariffs on imported cars unless Japan and the European Union offer trade concessions.