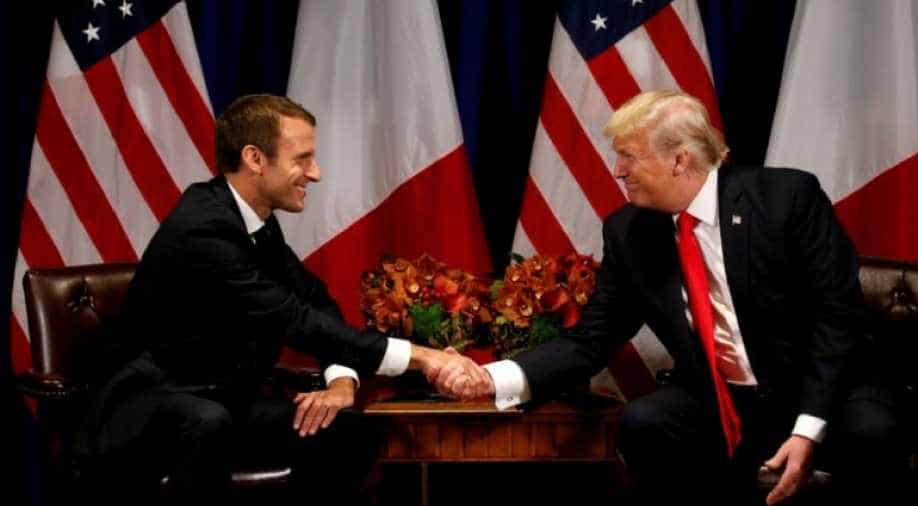 US President Donald Trump welcomes French President Emmanuel Macron to the White House on Monday to kick off a three-day state visit expected to be dominated by US-European differences on the Iran nuclear deal and trade.

It will be Trump's first hosting of a state visit since he took power in January 2017. The pair will get a sense of their two countries' shared history during an evening meal on Monday night at Mount Vernon, the home of George Washington, the first US president and Revolutionary War commander whose alliance with France was critical to victory over the British.

The major work between them will be done on Tuesday during White House meetings and a joint news conference.

Trump and Macron began their improbable friendship a year ago in Belgium with a jaw-clenching handshake. While other European leaders have kept a certain distance from Trump, Macron has worked hard to remain close to the U.S. president and the two leaders speak frequently by phone.

Macron is on something of a rescue mission for the 2015 Iran nuclear deal, known as the Joint Comprehensive Plan of Action (JCPOA), which Trump has vowed to scrap unless European allies strengthen it by mid-May.

The deal reached between Iran, the United States and five other world powers put curbs on Iran's nuclear program in exchange for sanctions relief.

Macron said on Fox News Sunday that it would be better to protect the Iran deal instead of get rid of it, saying there is no "Plan B" to take its place.

"Is this agreement perfect and this JCPOA a perfect thing for our relationship with Iran?  No. But for nuclear -- what do you have? As a better option? I don't see it," he said.

Macron also wants to persuade Trump to exempt European nations from steel tariffs that are part of the US president's plan to reduce chronic trade deficits with countries around the world, chiefly China.

The two leaders are also expected to discuss Syria, less than two weeks after the United States, France and Britain launched airstrikes in Syria in retaliation for a suspected chemical weapons attack that killed dozens in Douma, Syria.

Macron said last week that he believed he had persuaded Trump to keep US troops in Syria, but Trump has been insistent on bringing them home, although he has not publicly provided a definite timetable.

Whether substantive progress will be made on these and other issues was unclear.

"Whether we will actually solve, or come to closure, or a full detailed agreement on some of the issues that we've touched on is difficult to say at this remove," a senior administration official told reporters on Friday.