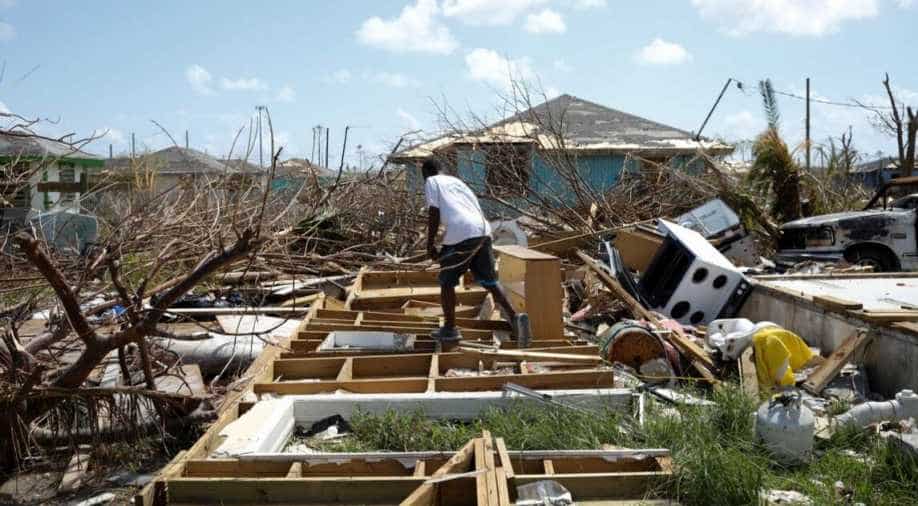 File photo: A man walks among the debris of his house after Hurricane Dorian hit the Abaco Islands in Spring City, Bahamas. Photograph:( Reuters )

The new weather system, known as Tropical Cyclone Nine, could strengthen into a tropical storm later on Friday, dropping up to 6 inches of rain through the weekend in areas of the islands inundated by Dorian, according to the Miami-based National Hurricane Center.

A tropical cyclone carrying heavy rain and strong winds neared the already devastated Bahamas on Friday ( September 13), threatening to complicate Hurricane Dorian recovery efforts as the UN secretary-general arrived in the islands in a show of support.

The new weather system, known as Tropical Cyclone Nine, could strengthen into a tropical storm later on Friday, dropping up to 6 inches of rain through the weekend in areas of the islands inundated by Dorian, according to the Miami-based National Hurricane Center.

Hurricane Dorian slammed into the Bahamas on September 1 as a Category 5 storm, one of the strongest Atlantic hurricanes on record to hit land, packing top sustained winds of 185 miles per hour (298 km per hour).

"The financial cost of the damage caused by Dorian is not clear, but it will be in the billions of dollars. The Bahamas cannot be expected to foot this bill alone," UN Secretary-General Antonio Guterres said on his arrival in Nassau.

Guterres was expected to visit over the weekend with people affected by the hurricane and the humanitarian teams assisting them. He plans to continue talks with Prime Minister Hubert Minnis in Nassau.

Minnis said earlier this week that the official death toll stood at 50 but was expected to rise.

Tropical Cyclone Nine was not expected to bring anywhere near the devastation of Dorian, even if it strengthens into a depression or storm.

But the potentially heavy rain and winds, which could reach 30 mph (48 km), could hamper relief efforts in the northern Bahamas, where the powerful and slow-moving Dorian flattened thousands of structures and left 70,000 people needing shelter, food and water and medical assistance.

The storm could delay the movement of food and water already on the ground, said Carl Smith, spokesman for the National Emergency Management Agency during a news conference.

By late afternoon on Friday, the tropical disturbance was 240 miles (385 km) east-southeast of Freeport on Grand Bahama Island, travelling northwest at 8 miles per hour, the NHC said.

A tropical storm warning was in effect for most of the Northwestern Bahamas, including Great Abaco Island and Grand Bahama Island, the Miami-based National Hurricane Center (NHC) said. Those islands were ravaged when Dorian ripped through the archipelago as a Category 5 storm.