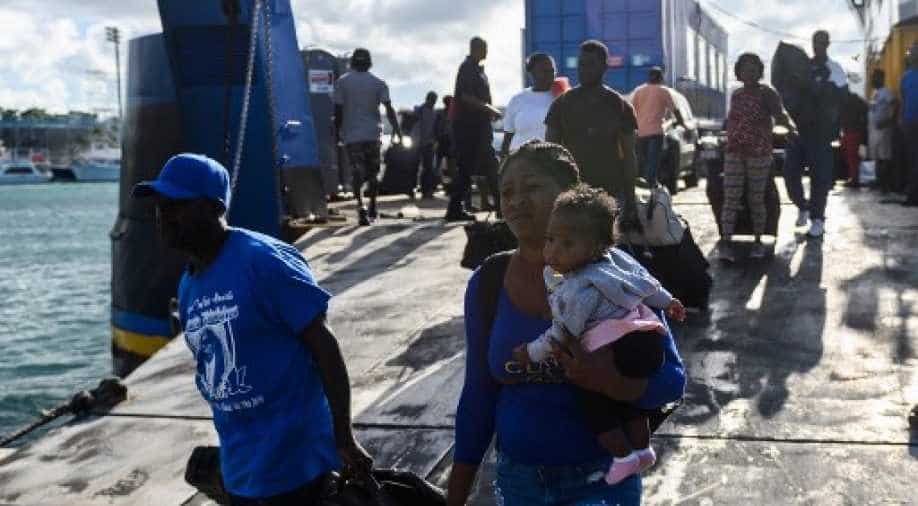 Evacuees get off a ferry after leaving Marsh Harbour on Abaco island in the aftermath of hurricane Dorian in Nassau, Bahamas. Photograph:( AFP )

Some 1,300 people are still unaccounted for in the Bahamas following Hurricane Dorian, officials said Thursday, down from the 2,500 previously reported.

The Bahamian National Emergency Management Agency (NEMA) attributed the drop to cross-referencing names of missing persons with those in shelters.

"It's very fluid," NEMA spokesman Carl Smith told reporters at a press conference in Nassau, the capital of the Bahamas.

The Bahamian authorities have put the death toll from the devastating Category 5 storm at 50 so far.

But they have said they expect that number to rise significantly and a former prime minister said he feared the final toll could be in the hundreds.

"Based upon information I have, based on my knowledge, there are hundreds of people who died," the Nassau Guardian newspaper quoted former premier Hubert Ingraham as saying on Wednesday.

"I pay no attention to 50," Ingraham said after touring hurricane-ravaged Abaco Island.

"Hundreds of people have died in Abaco, and significant numbers in Grand Bahama," the other island severely damaged by the storm, he said.

Bahamian police commissioner Anthony Ferguson was asked at the press conference about the search for victims of the storm.

"It's a slow process," Ferguson said. "We have to go through all of that rubble, take our time and search.

"It's going to take a long time before you can really say (final) numbers," he said.

Search operations could be impacted by approaching weather.

The Miami-based National Hurricane Center said in its 5:00 pm (2100 GMT) bulletin that a weather system in the Atlantic was expected to become a tropical storm and bring strong winds and heavy rainfall to the northwest Bahamas in the next 36 hours.

Smith, the NEMA spokesman, said 150 people were currently in shelters on the island of Grand Bahama and 2,000 on New Providence, where Nassau is located.

"We are no longer receiving a lot of displaced persons from Abaco," he added.

The NEMA spokesman also said the authorities were suspending deportations of illegal immigrants who were affected by the storm. The Bahamas has a large community of Haitians and some who are in the archipelago illegally have expressed fears of being sent home.

UN Secretary General Antonio Guterres announced meanwhile that he would go to the Bahamas on Friday to express his "deep solidarity" with the Atlantic archipelago.

Besides solidarity, Guterres said he wanted to encourage the international community to "increase the support to the Bahamas people and to the Bahamas government."

Guterres also said the hurricane is a warning of the dangers of climate change.

"All this is a demonstration of what we have all been saying in the recent past," he said. "Climate change is running faster than we are and we need to have a much more ambitious approach in what we do in order to defeat climate change."