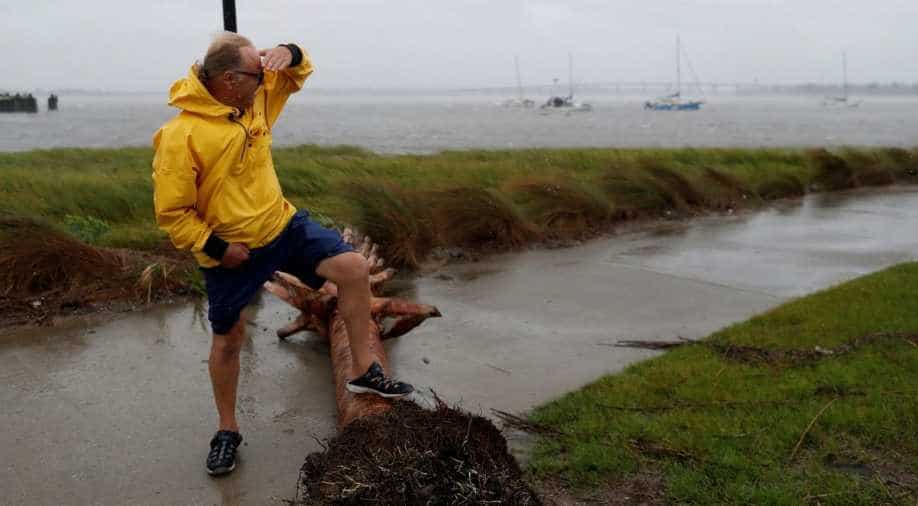 The eyewall of the weakening Hurricane Dorian was scraping the edge of Cape Lookout, N.C., just 30 miles (50 km) west-southwest of the state's Outer Banks islands at 7 a.m. EDT on Friday.

Hurricane Dorian, downgraded to a Category 1 but still packing 90 mph (150 kph) winds, crawled north on Friday, skirting the Carolinas and flooding coastal towns a couple of days after it reduced parts of the Bahamas to rubble.

The eyewall of the weakening Hurricane Dorian was scraping the edge of Cape Lookout, N.C., just 30 miles (50 km) west-southwest of the state's Outer Banks islands at 7 a.m. EDT on Friday.

The hurricane does not officially make landfall until at least half of its eye crosses land, the National Hurricane Center said. It could still make landfall later Friday morning, forecasters said.

It lashed the Outer Banks with hurricane-force winds as far as 45 miles from the centre of the hurricane and sent tropical storm winds farther than 200 miles from its centre, National Hurricane Center in Miami said in an advisory.

It has already dumped up to 10 inches (25 cm) of rain along the coast between Charleston, S.C., to Wilmington, N.C., about 170 miles away, forecasters said.

"The rain is moving up north," said NWS forecaster Alex Lamers early on Friday. "Even the Raleigh-Durham area inland will get 3 inches today."

Dorian is expected to push out to sea later on Friday and bring tropical storm winds to Nantucket Island and Martha's Vineyard, Massachusetts early on Saturday.

But it will likely spare much of the rest of the east coast of the worst of its rain and wind, before likely making landfall in Nova Scotia that night, the NHC said.

"It's in the process of moving out, going north," Lamers said.

The howling west flank of Dorian has soaked the Carolinas since early Thursday, flooding coastal towns, whipping up more than a dozen tornadoes and cutting power to hundreds of thousands of people.

Floodwaters rose to a foot (30 cm) or more in parts of the historic South Carolina city of Charleston, where more than 7 inches (18 cm) of rain fell in some areas, officials said. Another half-inch or more was expected overnight Friday.

More than 330,000 homes and businesses were without power in North Carolina and South Carolina on Friday morning. Power had mostly been restored to thousands of people in Georgia, tracking site poweroutage.us showed.

But as Dorian is expected to pick up speed from its 14 mph (22 kph) crawl on Friday, life-threatening storm surges and dangerous winds remain a threat for much of the area and Virginia, the NHC said.

At least 70,000 Bahamians needed immediate humanitarian relief after Dorian became the most damaging storm ever to hit the island nation.
In the Carolinas alone, more than 900,000 people had been ordered to evacuate their homes. It was unclear how many did so.

In Kill Devil Hills in the Outer Banks, Mark Jennings decided to ignore the order, lining his garage door with sandbags and boarding up his home with plywood.

The retired firefighter planned to stay put with his wife and two dogs, saying: "We are ready to go. If something happens, we can still get out of here."

Dorian whipped up at least three tornadoes in the region, officials said. One in North Carolina damaged scores of trailers at a campground in Emerald Isle, but no one was injured, the News & Observer said.

Of at least four storm-related deaths reported in the United States, three were in Orange County, Florida, during storm preparations or evacuation, the mayor's office said.

In North Carolina, an 85-year-old man fell off a ladder while barricading his home for Dorian, the governor said.