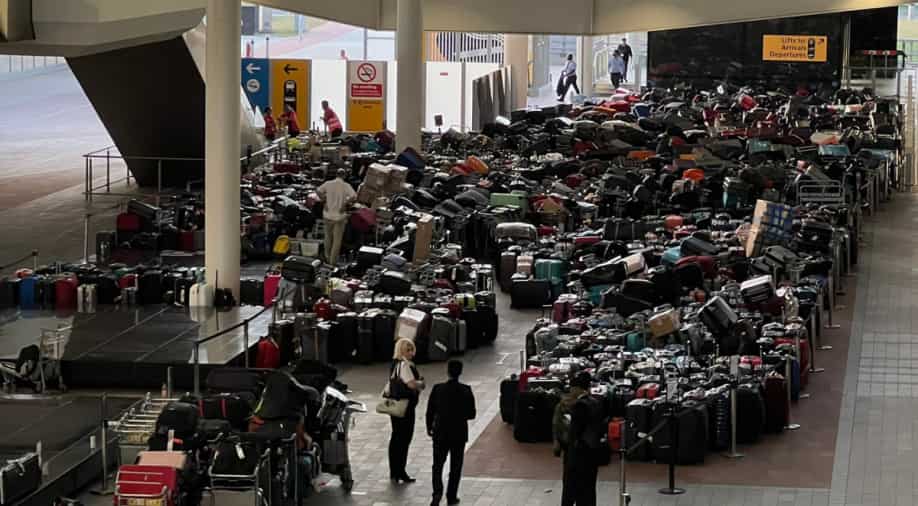 A Heathrow representative said, that there was a technical issue with the terminal’s baggage system which was fixed later. (Image courtesy: sa_callaway/Twitter) Photograph:( Twitter )

It comes amid weeks of travel disruptions, as airports in UK and Europe are failing to cope with the peak travel season travel

As airport staff dealt with a technical snag with the baggage system, an “enormous luggage carpet” was spotted outside a terminal at Heathrow, Britain's busiest airport. Several people witnessed the chaos while exiting Terminal 2 as they struggled to get hold of thier luggage bags.

UK's aviation industry has been struggling to keep up with post-pandemic demand after sacking too many employees during Covid lockdowns.

Staff were trying to arrange bags around poles with letters on them but it looked like they had their work cut out for them.

A passenger who was present at the same terminal said, “Passengers are being told they may not get their luggage for two days. She further said, "One passenger was overheard saying 'but I'm climbing Kilimanjaro tomorrow I need all my stuff."

A Heathrow representative said that there was a technical issue with the terminal’s baggage system which was fixed later. The travellers were able to check-in as usual but some of them arrived without their bags.

"We are working closely with airlines to reunite passengers with their luggage as soon as possible.  We're sorry there has been disruption to passenger journeys,” the representative was quoted as saying.

It comes amid weeks of travel disruptions, as airports in UK and Europe are failing to cope with the peak travel season. Staffing shortages over the last month have also resulted in hundreds of cancellations.

However, the chief executive of Heathrow’s John Holland in conversation with Sky news said that the passengers faced some minor delays while travelling. He defended against the charges saying the sector was unable to cope with the resurgence of travellers' demand after two years of Covid lockdowns.