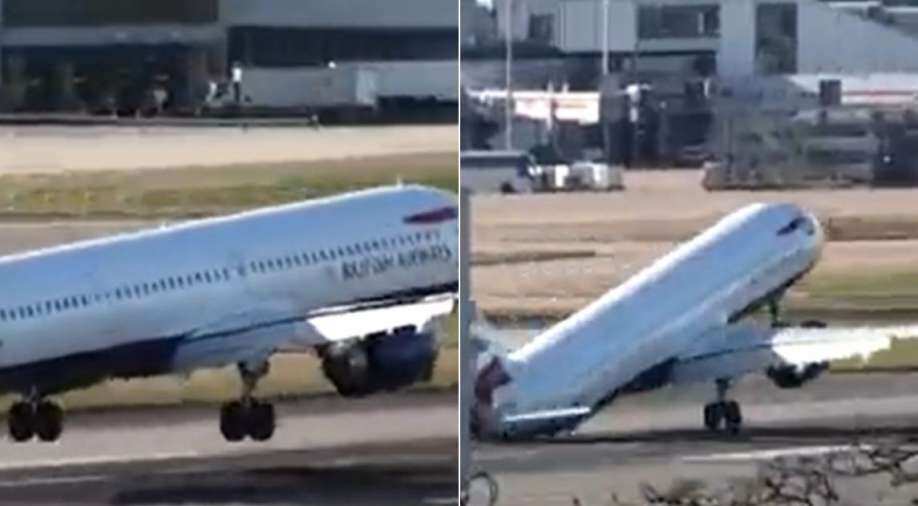 The spine-chilling video showed winds hitting the aircraft as it tried to land, almost toppling it. The plane resumed its flight

A British Airways plane almost toppled while landing at London's Heathrow Airport on Monday (January 31) due to the really strong winds.

The plane was travelling from Aberdeen aborted an attempt to land on the runway after the incident.

The video was shot by Jerry Dyer, who is said to be a regular at Heathrow where he films planes landing and taking off for his YouTube channel Big Jet TV.

A British Airways spokesperson told the media, "Our pilots are highly trained to manage a range of scenarios, including extreme weather conditions, and our flight crew landed the aircraft safely."

The spine-chilling video showed winds hitting the aircraft as it tried to land, almost toppling it. The plane resumed its flight. Reacting to the dramatic footage, Dyer told CNN that the incident "just goes to show how skilled pilots are."

One of the passengers was a member of the UK Parliament. Richard Thomson, MP for Gordon, in northeast Scotland, told CNN that he owes the pilot "deep gratitude for their professionalism and calm in how they dealt with what was a potentially very dangerous situation."

Storm Corrie, which has bettered the United Kingdom caused wind gusts of up to 120 kph in the North Sea. Reports have mentioned that Storm Corrie has claimed two people's lives and left many without power.

While posting the video on YouTube, Big Jet TV wrote, "Our feed is always around 20 seconds out after we hit the ‘go live’ button (quite a bit more complexed than that)."

"But as we started the feed, this A321neo from Aberdeen was on approach so we went for it. But the feed went ‘live’ to the viewers as the jet was climbing-out," it added.

"So here it is! A full-on Touch and go, with a tail strike - checkout the paint dust after contact! You can also see the empennage shaking as it drags," it added.

The channel also mentioned, "I thought the pilot had it, but the wind was swirling over the Office buildings on the Bath Road. And there’s a gap between the open reach building and the next set of office buildings, which allows the gusts to flow unrestricted across the runway."