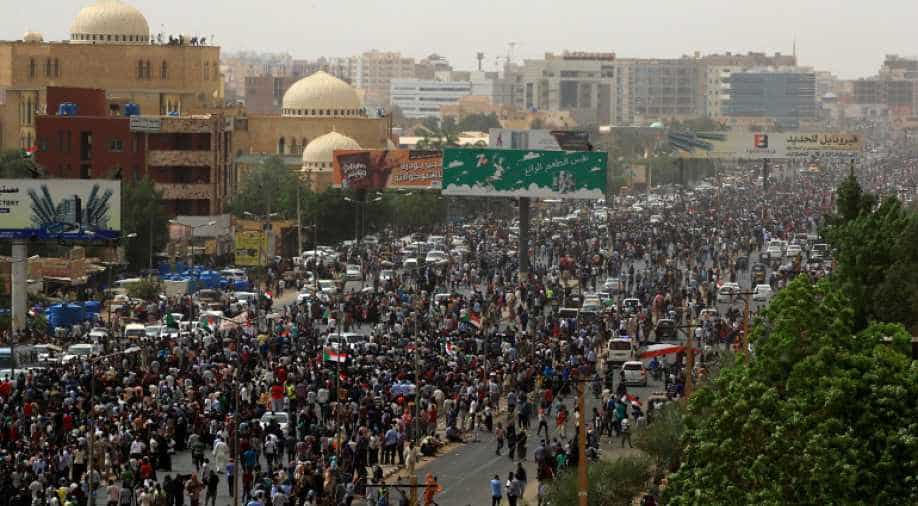 Crowds of protesters were violently dispersed by men in military fatigues in a pre-dawn raid on a sit-in outside army headquarters on June 3.

Sudanese protesters lit candles and released balloons in Khartoum as thousands rallied across the country to mourn dozens killed last month in a brutal raid on a protest camp, AFP correspondents reported.

Crowds of protesters were violently dispersed by men in military fatigues in a pre-dawn raid on a sit-in outside army headquarters on June 3.

Saturday's commemorative rallies came as mediators said talks between generals and protest leaders to discuss the finer details of a recently agreed power-sharing accord had been postponed to Sunday, at the request of protest leaders.

They were previously scheduled for Saturday evening.

The protest movement, the Alliance for Freedom and Change, had called for marches  -- dubbed "Justice First" -- across the country on Saturday to mark 40 days since the raid.

Demonstrators who had camped outside military headquarters for weeks demanding civilian rule were shot and beaten, triggering international outrage.

Chanting "Blood for blood, we won't accept compensations," crowds of protesters marched in Khartoum's northern district of Bahari, a protest hotbed since demonstrations first erupted in December against the then regime of now-ousted president Omar al-Bashir.

Many lit candles and some floated balloons while hundreds bathed the area in a sea of light -- holding their mobile phones aloft as torches while chanting revolutionary slogans, an AFP correspondent reported.

"We must take what is ours, we must free Sudan from its past. We want civilian rule now," said Abdelqadir Omar, an English teacher at a rally in the Al-Sahafa area of the capital.

Waving a Sudanese flag, an 11-year-old boy said, "all the mothers were crying in their homes when their children were killed".

Groups of protesters sat in circles around Sudanese flags and candles in several neighbourhoods as the sunset over Khartoum.

Protesters rallied in the eastern cities of Madani and Kassala and in the central city of Al-Obeid, witnesses told AFP by telephone.

Many protesters reportedly carried banners that read: "Justice for Martyrs" while others held photographs of demonstrators killed in the June 3 raid.

People also took to the streets of Atbara, where the first rally against Bashir's government was held on December 19 in response to a decision to triple bread prices.

The protests in December swiftly escalated into nationwide demonstrations against the autocrat's ironfisted three-decade rule.

Bashir was ousted by the army on April 11, five days after the protesters had first massed outside army headquarters.

Protesters continued their sit-in, demanding that the generals themselves step down, ahead of the brutal dispersal on June 3.

The military council insists it did not order the raid, which according to the protest movement killed more than 100 and wounded hundreds in just one day.

But after intense mediation by the African Union and Ethiopia, a landmark power-sharing deal was reached earlier this month that aims to set up a joint civilian-military governing body.

The new governing body aims to install a transitional civilian administration for a period of just over three years.

The agreement stipulates that the new governing body will be presided over by a military nominee for the first 21 months, and by a civilian for the last 18 months.

"We are not an enemy of the Alliance for Freedom and Change," General Mohamed Hamdan Dagalo, the deputy chief of the ruling military council, told a rally in Nile State, broadcast on state TV.

"We are in a real partnership."

Dagalo is also the commander of the feared paramilitary Rapid Support Forces which protesters and rights groups allege carried out the June 3 raid.