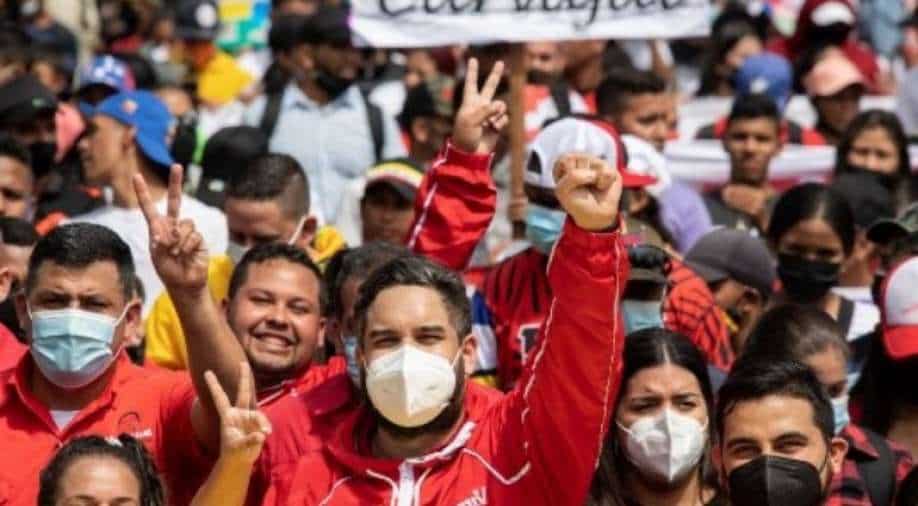 Thousands of pro-government demonstrators marched through Caracas Saturday in support of President Nicolas Maduro, with a smaller opposition rally gathering in parallel.

To the sound of drums and salsa, thousands of Chavistas -- named after Hugo Chavez, a figure of the Latin American radical left and late predecessor of Maduro -- marched some 14 kilometers (nine miles) through the streets of the capital.

"Chavez sets the tone, Maduro is behind the wheel," read one banner.

The government had mobilized its party and chartered buses to bring in supporters of all ages from all over the country for the rally held on World Youth Day.

"The courageous youth are following their dreams and continuing to fight for their homeland," 26-year-old Maria Amatima told AFP.

Maduro, met with cheers, ended the demonstration saying, "I ask you (the youth) to help me... against corruption and bureaucracy... I come to ask you for help."

Maduro's re-election in 2018 in a vote boycotted by the opposition is not recognized by part of the international community and in particular the United States, which backs the opposition.

Some 500 opposition supporters, joined by leader Juan Guaido, also gathered in Caracas in a parallel rally.

Guaido called for "unity" in the wake of the defeat of a divided opposition in regional elections in November.

"We pledge today to fight... we must strengthen unity," he said, promising to revive the street protests that rocked the government in 2019 but eventually died out.

"We are going to return... to the place where freedoms are exercised: the street."