A million bolivars become one as Venezuela recalibrates battered currency 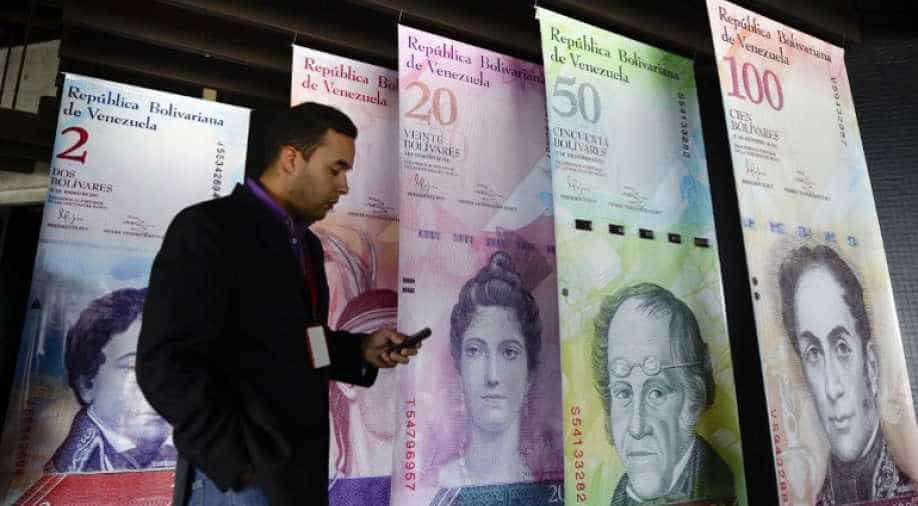 Venezuela's central bank announced the move last month to simplify transactions, with consumers scrambling to make payment for even the most basic goods or services

For the third time in 13 years, Venezuela on Friday will slash zeroes off its inflation-battered currency, the bolivar. This time, it will shed six zeroes, for a total of 14 since 2008.

With that, a million bolivars will overnight become one still the equivalent of about 25 US dollar cents.

Venezuela's central bank announced the move last month to simplify transactions, with consumers scrambling to make payment for even the most basic goods or services.

Seven one-million bolivar notes the highest denomination and very hard to come by -- are required to pay in cash for one loaf of bread in the once-rich oil-producing nation now battling the highest inflation in the world.

Venezuela's GDP has plummeted by 80 percent since 2013 as the oil price crashed and output dwindled during decades of under-investment and mismanagement by successive socialist governments.

Teacher Marelys Guerrero, 43, is one of the many Venezuelans who receives a salary in the millions of bolivars that are worth nothing.

"We earn, fortnightly, less than $3," she told AFP in Caracas.

Rent for an apartment in a modest suburb of the capital starts from about $150, while a basket of basic groceries for a family of five costs about $220.

Most payments in bolivars are done by debit card or bank transfer, but seventy percent of transactions are now conducted in dollars, according to private sector estimates, and prices on many shop shelves are displayed in the US currency, to keep things simpler.

On Friday, Venezuela becomes the South American country to have removed the most zeroes from its currency. It lost three in 2008 under now-deceased President Hugo Chavez, whose successor Nicolas Maduro eliminated five more in 2018.

The bolivar is now worth so little that children use it for play money.

In Venezuela's border regions, besides the dollar, it is common to also pay for goods in Colombian pesos or Brazilian reais, and even grams of gold.

In the rest of the country, cash is used almost exclusively for purchasing public transport tickets, but even this presents a headache as notes are scarce and can only be obtained by standing in long queues at the bank.

"I'll buy your dollar!" -- children with thick wads of bolivar bills yell at buses that, along with bus stops, have become informal currency exchange offices.

The government will issue new banknotes in denominations of five, 10, 20, 50 and 100 bolivars, as well as a one-bolivar coin after Friday's change.

But the government has also said that it wants the economy to become entirely digital, a move, experts say, is meant to avoid printing money that will just continue devaluing.

"If inflation behaves as it has in recent months, it is very likely that in about three or four years the government will have to reconvert again," Luis Arturo Barcenas of economic consultancy Ecoanalitica told AFP.

The bolivar has lost nearly all its value in just over a decade, shedding almost 73 percent in 2021 alone.

The country's annual budget of 115 billion bolivars in 2007, then the equivalent of $50 billion, if held in bolivars, would be worth less than a dollar today.

Venezuela is battling its eight year of recession as well as hyperinflation that reached nearly 3,000 percent in 2020 and more than 9,500 percent the year before, according to central bank figures.

In May, the government tripled the minimum monthly wage but the new amount was not enough even to buy a kilogram of meat.

Three in four Venezuelans today live in extreme poverty, according to an academic study published Wednesday, with the economic collapse was worsened by the coronavirus pandemic.

Millions have left the country in recent years to try their luck elsewhere, but many have ended up as refugees.

While consumers like Guerrero fear Friday's readjustment of the bolivar could further squash their pocket with shopkeepers rounding up prices, others like Caracas accountant Rodrigo Bermudez welcome the change.

"It’s a relief... The number of digits was making everything very cumbersome," he told AFP, showing an invoice with too many zeroes to make any sense of.