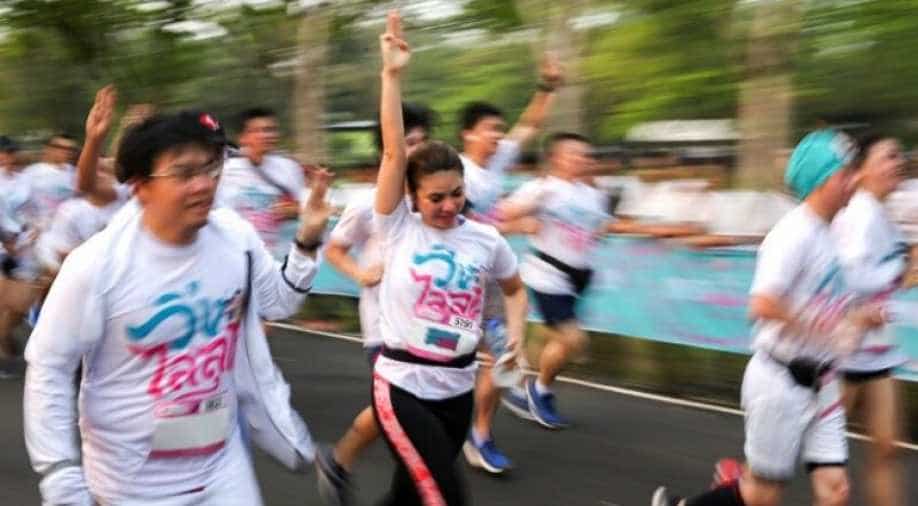 Runners flash the three-finger salute as they attend the 'Run Against Dictatorship' event at a Public park in Bangkok, Thailand. Photograph:( Reuters )

Thousands of runners showed up at a public park in Bangkok in athletic outfits and colourful shoes starting before sunrise to join the 'Run Against Dictatorship' event. Organizers said more than 10,000 people registered to attend.

Thousands of Thais participated on Sunday in a run billed as an anti-government protest, in what appeared to be the biggest show of dissent against the government of former junta leader Prime Minister Prayuth Chan-Ocha.

Thousands of runners showed up at a public park in Bangkok in athletic outfits and colourful shoes starting before sunrise to join the "Run Against Dictatorship" event. Organizers said more than 10,000 people registered to attend.

Many shouted, "Prayuth, get out!" or "Long live democracy!" while running the 2.6-km (1.6-mile) course amid a light presence of security forces. Some also gave a three-finger salute of resistance to the former junta, a gesture drawn from the film "The Hunger Games." 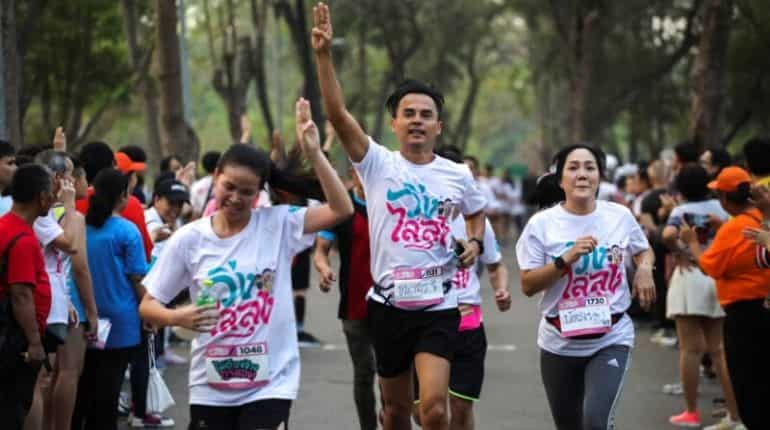 [ Runners flash three finger salute as they attend a "Run Against Dictatorship" event at a public park in Bangkok, Thailand (Courtesy: Reuters) ]

The run followed a political rally last month staged by prominent opposition figure Thanathorn Juangroongruangkit, the largest since a 2014 coup when then-army chief Prayuth seized power from a civilian government.

Tanawat Wongchai, who organized Sunday's event, said it was aimed at opening public space for dissent to push back against political suppression that started after Prayuth's coup and now continued under his civilian government.

"We want people to feel that to come out and demand our rights and express ourselves is something that can be done," he said.

He dismissed concerns that the run could spark violent protests like those that have roiled the Thai capital periodically and culminated in 2006 and 2014 coups.

The government said it would allow Sunday's event to go ahead but warned participants not to break the law. 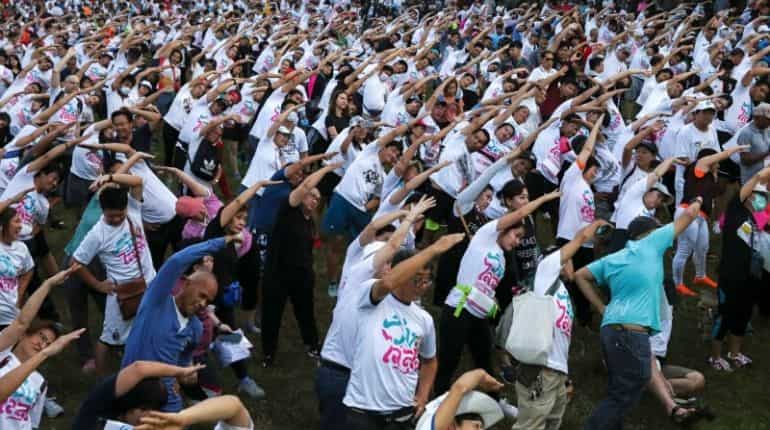 [ Runners warm up as they attend the "Run Against Dictatorship" event at a Public park in Bangkok, Thailand (Courtesy: Reuters) ]

During the December rally, Thanathorn publicly endorsed and urged supporters to join Sunday's event, originally called "Wing Lai Loong" in Thai, which translates as "Run to Oust the Uncle", an apparent reference to Prayuth whom Thais have nicknamed "Uncle Tu."

Thanathorn, a 41-year-old billionaire, has emerged as the most outspoken opponent of the new civilian government headed by Prayuth, 65, since an election in March 2019 that the opposition said was manipulated to favour Prayuth's pro-army party.

Thanathorn was charged on Friday with breaching a law on public assembly with the December rally, and Future Forward, the political party founded by Thanathorn, faces dissolution later this month by the constitutional court.

A rival event to the run was due to take place in another public park some 14 kilometres (8.7 miles) away.

About 3,000 people registered to join the "Walk to Cheer Uncle" event to show support for the government and Prayuth, according to the organizers.