Those who don't shun violence will be killed, says Kazakh govt as 18 troops die 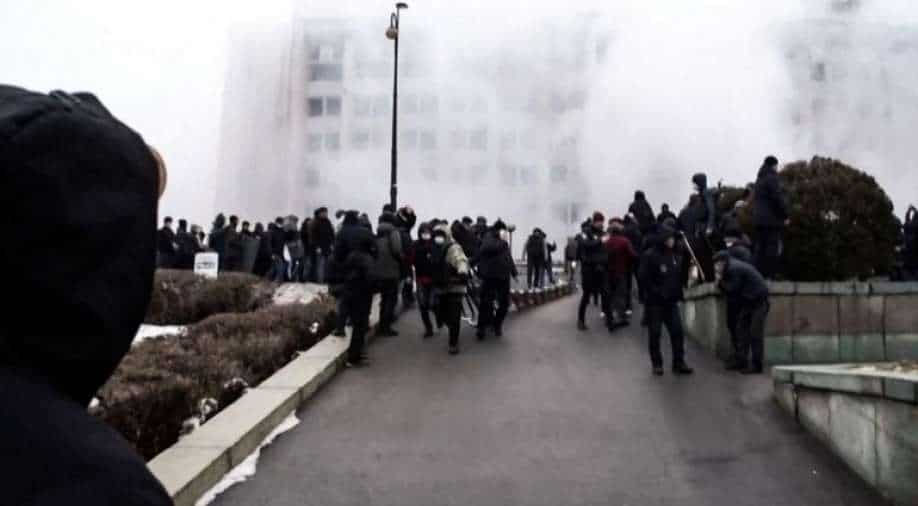 A frame grab taken on January 6, 2022 from an AFPTV video made on January 5, 2022, shows protesters storming in the city hall of Kazakhstan's largest city Almaty as unprecedented unrest in the Central Asian nation spins out of control due to a hike in energy prices. Photograph:( AFP )

Kazakhstan's Internal Affairs Ministry has said that those who refuse to lay down their arms will be killed.

The number of law enforcement officers killed during protests in Kazakhstan has increased to 18, the Kazakh news agency Tengrinews.kz reported on Thursday citing the Kazakh Interior Ministry.

748 police officers and soldiers were hurt, according to the news oultlet.

A total of 2,298 demonstrators were held across the country, according to the agency.

Kazakhstan's Internal Affairs Ministry has said that those who refuse to lay down their arms will be killed.

According to Russian news agencies Interfax and RIA Novosti, Kazakhstan's Khabar 24 news station reported the death toll as of midday, claiming that the body of one of the slain security officials was discovered with its head chopped off.

As Moscow-led soldiers deployed to assist in suppressing major unrest that left dozens dead and hundreds jailed, bursts of gunfire resonated through the streets of Kazakhstan's main city on Thursday.

A day after demonstrators stormed multiple government buildings, fighting appeared to be continuing, with an AFP correspondent hearing regular bursts of gunfire from the direction of a central square.

The streets of Almaty were littered with burned-out automobiles, numerous government buildings were in ruins, and bullet shells littered the grounds of the presidential palace, which had been assaulted and ransacked by demonstrators on Wednesday.