This country could be underwater by the end of the century 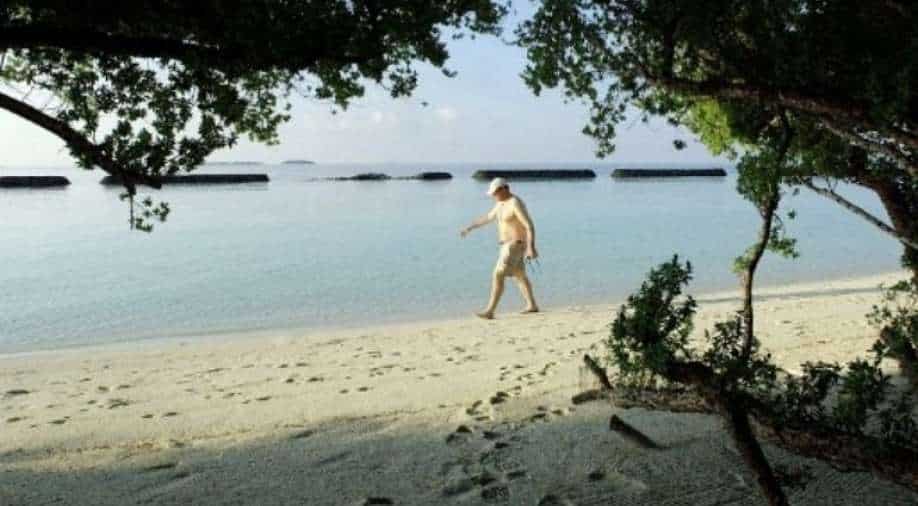 A foreign tourist walks along the beach in the Maldive's Kurumba island (File Photo) Photograph:( AFP )

Climate change is increasing sea levels, and data for the Maldives indicates an increase of three to four millimetres over the past year alone. This means that in a decade's time, these low-lying islands could be buried completely underwater

The Maldives, an archipelago of low-lying islands in the Indian Ocean, faces a triple existential crisis brought about by climate change.

The rising sea levels are threatening to submerge some islands of the archipelago and scientists predict that this disaster could occur within the next decade.

Another threat to the under-pressure islands is the abrupt change in seasonal weather patterns. The frequency and intensity of monsoons and tropical storms have increased. It has accelerated the pace of coastal erosion.

Also read | Which countries and blocs are major players at the Glasgow climate summit?

The resulting shrinkage of islands is pretty dramatic.

However, the loss of atoll coral is perhaps one of the most pressing emergencies. As the sea temperatures rise, coral reefs are dying and this has devastating effects both on land and at sea.

Not only are coral reefs an essential part of the entire marine ecosystem, but they protect the island's coastline as well.

Azim Musthag, a marine scientist with the Small Island Research Group in Male, the capital of the Maldives, has been monitoring the island archipelago's coral reefs. He reports that his findings are troubling; most of the coral reefs are dead or aren't recovering quickly enough which is bad for a nation like the Maldives.

He says that the coral reef is the basis of life in the Maldives. As a country in the middle of the Indian Ocean, without other sources of nutrients around, the reef supports nearly all of Maldives's marine life.

Musthag emphasized that it is time to act, adding that there is a need to reduce greenhouse gas emissions, or better yet bring them below zero. Investing in or restoring blue-carbon ecosystems such as mangroves, seagrass meadows, and natural forests is now a necessity.

He added that the time for action is less, and something needs to be done fast. He believes that the major countries and players are doing little about it, or aren't moving as fast as they need to.

Climate change is increasing sea levels, and data for the Maldives indicates an increase of three to four millimetres over the past year alone. This means that in a decade's time, these low-lying islands could be buried completely underwater.

Dr Abdulla Naseer, Minister of State for Environment, is concerned that people may have to move to another island.

The Maldivian government may have to take extreme measures like forceful evacuation if a solution is not found soon.

For years, climate change has been hailed as a threat to the Maldives. Now, increasing pressure is looming over the islands. Already for too long now, the warning signs have been ignored.