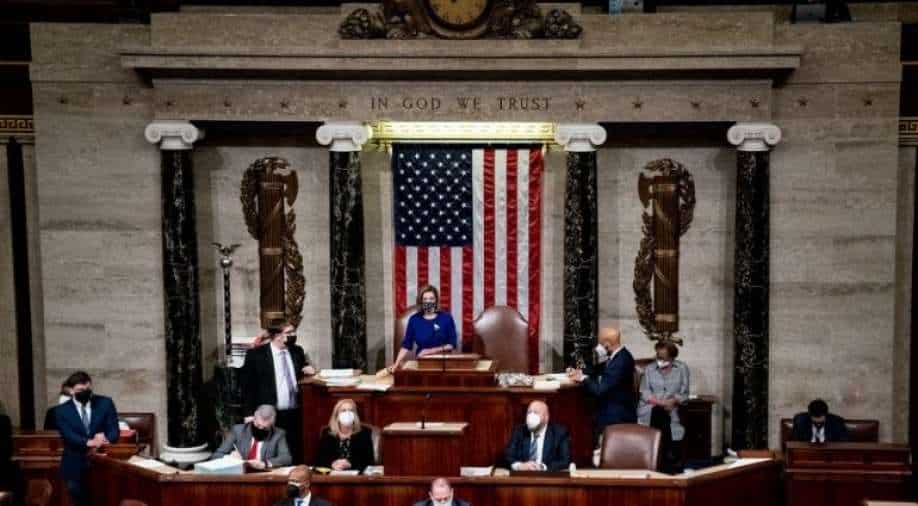 House Speaker Nancy Pelosi speaks as the House comes back into session to continue the process of certifying the 2020 Electoral College results after Pro-Trump demonstrators stormed the Capitol in Washington, DC on January 6, 2020. Photograph:( AFP )

As per initial reports, at least two computers have been stolen from the Capitol during the pro-Trump riots. which took place on Wednesday

A lot happened during the time when Donald Trump's supporter rioted the Capitol Building in Washington, United States. While the officials are already calculating the damage caused to the government property, another concern has been raised by lawmakers which has sent the Capitol into a panic.

As per initial reports, at least two computers have been stolen from the Capitol during the pro-Trump riots. which took place on Wednesday. One of the stolen laptops belonged to the US House Speaker Nancy Pelosi.

An aide close to Pelosi, who has been re-elected for the post, confirmed that a laptop that belonged to Pelosi was stolen during the riots. The laptop, according to the aide, belonged "to a conference room and was used for presentations". The second laptop stolen belonged to a Democratic senator Jeff Merkley of Oregon.

The acting US attorney, Michael Sherwin, has revealed that the stolen laptops may pose threats to "national security equities". However, the content of the laptops have not been revealed by any officials.

"Regardless of how much they want to downplay this, the laptop has to have at least access that could be leveraged," said Brandon Hoffman, the chief information security officer at IT security provider Netenrich. "It’s highly unlikely that this laptop was sitting there with no files, or file access, or any other useful information to somebody looking for leverage or retribution."

The breach of laptops may pose threat to national security, as per experts. However, it is still unclear how, and if, the stolen laptops can be traced. For now, the local authorities have launched an investigation into the matter.

Following the riots and the breach of security, Trump's arch-rival Nancy Pelosi has also announced that if Trump does not resign immediately, she has instructed the House Rules Committee to go ahead with the impeachment process for the infamous President.

"If the President does not leave office imminently and willingly, the Congress will proceed with our action,” House Speaker Nancy Pelosi said in a statement.

However, the White House officials are now warning the incoming administration about the pressure an impeachment would create on the outgoing Vice President Mike Pence and the remaining Trump administration. "Impeaching President Donald Trump with 12 days remaining in his presidency would only serve to further divide the country," said White House spokesman Judd Deere.