The push to vaccinate 20,000 Holocaust survivors in New York 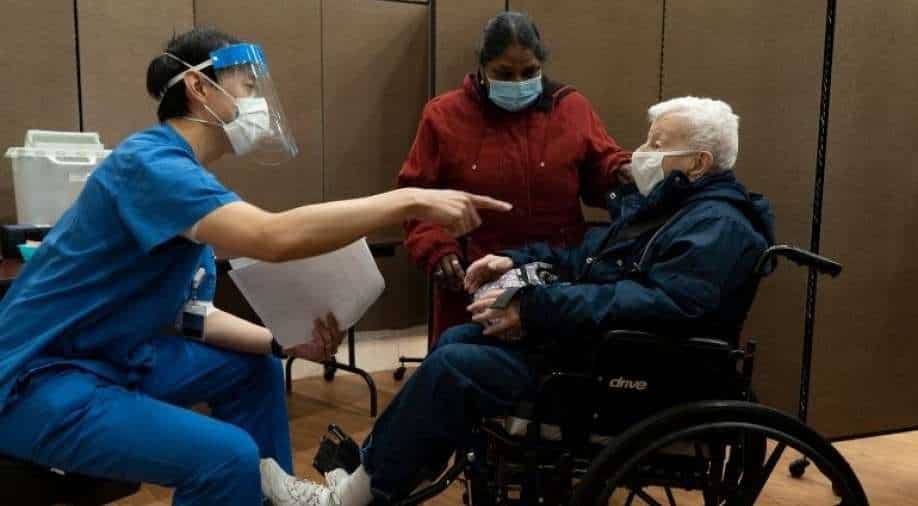 Anne Bertolino, 96, receives a COVID-19 vaccination at an event for Holocaust survivors in Queens on March 18, 2021. Despite having been eligible for vaccination since January, only 39 percent of New Yorkers 85 and older have been fully vaccinated, according to recent city data, which has jolted community groups into action. (James Estrin © 2021 The New York Times) Photograph:( The New York Times )

Despite having been eligible for vaccination since January, only 42% of New Yorkers 85 and older have been fully vaccinated

A year spent hiding at home from the coronavirus has given Anne Bertolino, 96, a lot of time to dwell on the past: the anti-Semitic abuse she suffered on the streets of Hamburg, Germany, as a child; the grandparents who pushed for her and her sister to leave the country for their own safety; and her mother, a widow who was killed in Auschwitz.

She has ached to return to a more normal life, when she socialized at a senior center instead of sitting in her apartment in Queens and watching old episodes of "The Jack Benny Program" and home makeover shows whose names she never learned.

“I am alone all the time so I have been thinking about the past a lot,” she said. “Unfortunately, I can’t forget anything. It drives me crazy.”

As millions of New Yorkers have gotten vaccinated and have begun to enjoy a taste of life after the pandemic, many like her have remained stuck at home. Bertolino, who uses a wheelchair and whose eyesight is fading, considered vaccine appointments unattainable, hidden behind an impenetrable tangle of websites.

Despite having been eligible for vaccination since January, only 42% of New Yorkers 85 and older have been fully vaccinated, according to recent city data, which has jolted community groups into action. For Jewish organizations, the fact that this age group includes many Holocaust survivors — some of their community’s most vulnerable and treasured members — has created an all-hands-on-deck emergency.

“The survivors serve a tremendous role in the community, more than I think a lot of them may realize,” said Avi Greenstein, the chief executive of the Boro Park Jewish Community Center, which has helped over 750 survivors get vaccinated in recent weeks.

He added: “The community looks at them and can say, ‘Wow, these people and their perseverance, this is the reason we are still around.’”

There are roughly 350,000 Holocaust survivors alive today, Jewish groups say, and New York City is home to one of the largest populations of them in the world. About 20,000 live in the five boroughs, 80% of those in Brooklyn, with an estimated 15,000 living in the suburbs, according to community leaders.

By now, all Holocaust survivors are over 75, and many live in financial hardship. Forty percent of survivors in the New York area live below the poverty line, according to Eric S. Goldstein, the chief executive of the UJA-Federation of New York.

It is one of several organizations that provide support services to Holocaust survivors, and in recent months it has helped 2,635 of them get vaccinated.

“No one is more deserving of community support than these people in their remaining years,” Goldstein said.

Bertolino finally received her first shot of the vaccine on a rainy day last month at an event for Holocaust survivors at a senior center in Flushing. She woke early to prepare for the excursion, donning pearls and a surgical mask for the occasion, and traveled across Queens in an Uber — her wheelchair in the trunk — with a home health aide.

“I can’t wait until everybody can come visit again,” Bertolino said, sitting in an observation area after receiving her shot in a mostly empty auditorium. “But you manage. You can get used to anything.”

Jewish groups have organized vaccination events across the city, getting senior centers, clinics and other sites to set aside time blocks when they can book appointments for groups of survivors.

The event Bertolino attended was organized by Selfhelp Community Services, which provides aid to more than 5,000 survivors of Nazi persecution in the New York area. It has helped more than 600 survivors get at least one dose of the vaccine, according to Hanan Simhon, who runs the group’s Holocaust survivor programs.

Eva Rose, 96, also trekked to Flushing from her home in Astoria to receive her first shot of the vaccine. She said the last year had been “very lousy.”

Like many survivors, she recounted a year filled with monotonous days watching TV and reflecting on the past, a rhythm broken only by visits from a home health aide or an occasional relative.

“I watch a lot of the news. The news has made every one of us crazy,” she said. “But I am still here, thank God.”

Rose, who was born in Hungary, said she lost 30 family members in the Holocaust and was a slave laborer at a facility next to Auschwitz that was owned by the German arms manufacturer Krupp.

She was one of the few workers there not killed in Auschwitz, she said. Krupp executives were later convicted of war crimes at the Nuremberg trials. The company now pays her a pension, but Rose said she views it as symbolic.

“Germany pays for some things, but they could never pay for what I lost,” she said.

Much of the assistance upon which elderly survivors rely is financed by the German government, which has paid more than $80 billion in reparations to the Conference on Jewish Material Claims Against Germany, an organization founded in 1951 to negotiate on behalf of Holocaust victims.

The Claims Conference works with roughly 20,000 survivors in the New York area, said its president, Gideon Taylor. It spent $69.7 million on them in 2020 — on things like home health care, food and medicine, social activities and dental care — and expects to spend $73 million in 2021, he said.

On Wednesday, the conference announced a new program, funded by $13.5 million from the German government, to help survivors worldwide get vaccinated. It said the funds will pay for transportation to and from a vaccination site, counseling and follow-up care in dozens of countries.

Studies have suggested that older people are better able to cope with hardship and turmoil than the young, but for Holocaust survivors the picture can be more complicated.

The trauma of the Nazi genocide has indeed given them deep reserves of fortitude that helped them manage the pandemic, experts say. But that same trauma has lingered in their lives in ways that a year of isolation, anxiety and fear has done nothing to assuage.

“The pandemic is in no way the same as the Holocaust, but we do know that events can trigger deep and painful memories, and that is what has happened here for many people,” Taylor said. “Is it safe to go outside? How will I get food? When will I see my friends and family? How long do I have to hide from the world?”

He added: “The pandemic has been an intertwined story of renewed trauma and renewed resilience, both coexisting inside people at the same time.”

Mayor Bill de Blasio said he was moved after attending a vaccination event for Holocaust survivors in Borough Park, Brooklyn, and dedicated part of one of his recent news conferences to talking about and showing photos of his visit.

“I came away from this meeting, this moment with — just filled with hope and appreciation for a human strength and resilience and faith,” the mayor said at the news conference.

Bertolino said she and her sister left Germany on April 13, 1939, as part of an effort organized by a prominent Jewish woman in Hamburg. Thousands of Jewish children escaped Nazi Germany in similar convoys, called Kindertransport, that left German-occupied lands in the spring and summer of 1939. Most of the convoys went to Britain, but all of them stopped when war began that fall.

Bertolino said she lived with a Swedish foster family in the rural town of Mellerud for two years, a time she remembers as frightening but also filled with the kind of freedom she had never known under Nazi rule.

She left the town after two years and moved to Stockholm to work and live with other young Jewish refugees in an apartment paid for by the local Jewish community.

She never saw her family again. After the war she learned that her mother had been killed but her grandmother survived in the Theresienstadt concentration camp. Her grandmother went back to Hamburg and lived the rest of her days at a Jewish retirement home. Bertolino never got the chance to visit, but she can still recite its address.

She got married, had a daughter and moved to New York. But her daughter, now 75, has dementia and lives with caretakers elsewhere in the city. Bertolino has not had much company lately, aside from a home health aide who comes in the mornings.

Together, they watch the news sometimes. Lately, Bertolino has recoiled at reports of hate crimes targeting Asian Americans.

“That is the kind of thing I have been on the receiving end of,” she said. “When I hear about things like that, it is like I can see my mother standing right in front of me.”

To busy her mind and pass the time, she tries to think about good things. Affectionate squabbles she would have with her husband over taking out the trash. Recipes she used to make when standing at the stove was not so hard. How her mother might react to the idea of her daughter’s 97th birthday in May.

And she repeats little sayings to keep her spirits up. A favorite: “What you cannot cure, you must endure.”