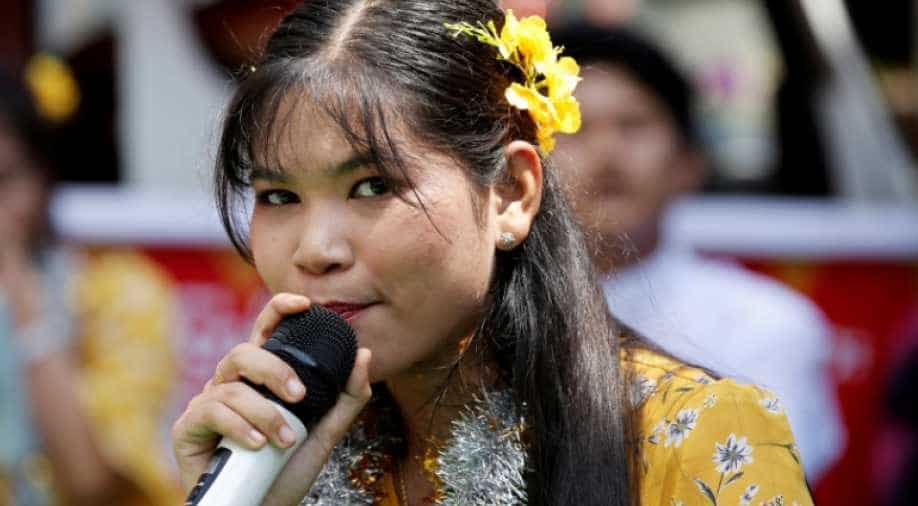 Me Me May, 20, a student from Dagon University, performs Burmese traditional slam poetry or thangyat during Burmese New Year in Yangon. Photograph:( Reuters )

It was the final rehearsal of a troupe performing 'thangyat', a centuries-old custom allowing free rein to satirise rulers and society during New Year celebrations that began on Saturday.

In a classroom on the outskirts of Myanmar's biggest city, a thin, bespectacled university student-led about a dozen peers in boisterous chants of "Censorship is a shame!" and "We don’t believe in censorship!"

It was the final rehearsal of a troupe performing "thangyat", a centuries-old custom allowing free rein to satirise rulers and society during New Year celebrations that began on Saturday.

The tradition, featuring a mix of comedy and slam poetry set to drums, has sparked controversy this year, with troupes in Yangon, the commercial capital, saying the first democratic government in 50 years forced them to submit lyrics to a sensor panel.

"We founded the thangyat in order to serve as the people’s messengers to the government," said the student, 20-year-old Thant Zin.

"Why don’t they dare to listen to the people of the country, students of the country?" added Aung Min Thu, a 23-year-old who helped organize the troupe.

The issue has ignited debate on social media and highlights Myanmar's limits on freedom of speech under the government of Nobel peace laureate Aung San Suu Kyi, a year ahead of elections set for 2020.

A spokesman for Suu Kyi's ruling party, the National League for Democracy, said the curbs on thangyat were "temporary" as Myanmar moves towards democracy.

"Currently our country hasn't achieved democracy," said Dr Myo Nyunt. "We worry that unnecessary things will happen due to the thangyat. So the authorities issued temporary restrictions."

He added, "We always prioritize and are working on freedom of speech and freedom of expression."

The military junta that ruled Myanmar for decades outlawed thangyat performances but they resumed in 2013 after a return to semi-civilian rule. Many supporters of Suu Kyi’s party pushed for the revival.

But in March, ahead of this year's celebrations, authorities in Yangon, home of the most elaborate performances, set up a panel to scrutinise the lyrics of thangyat, and performers must now seek its approval.

The panel aims at averting ethnic or religious conflict, rather than censorship, its chairman, Zaw Aye Maung, told Reuters by telephone.

"There is freedom of speech, but we can’t allow obstructive ways, can’t speak harmful words about individual people or organizations," he said.

However, officials with loudspeakers have gone around at least two townships warning they would take action if thangyat performances targeted the government, residents told Reuters.

Thant Zin’s troupe and members of others said they had refused to submit their lyrics to the panel and planned to perform on the street anyway.

"The stages which accepted us during previous festivals apologised and rejected us," said Thant Zin.

His troupe is one of several planning lyrics that criticise the government’s failure to amend the 2008 constitution, which reserves power for the military, as well as lacklustre economic growth and controversial development projects.

"Thangyat reveals the obstacles of the people," he said.

Three-and-a-half years after a landslide 2015 election win that brought Suu Kyi’s government to power, it faces international pressure for its response to a military crackdown on the Rohingya Muslim minority in August 2017 that drove some 730,000 into neighbouring Bangladesh.

The campaign was executed with "genocidal intent", the United Nations has said.

At home, critics say the administration has been slow to fulfil election promises to reconcile armed rebels in different regions and amend the military-drafted constitution.

Activists say authorities have failed to safeguard freedom of expression. One group, Athan, or "Voice" in Burmese, says 44 journalists and 142 activists have faced trial under the Suu Kyi government.

Among them are Reuters reporters Wa Lone, 33, and Kyaw Soe Oo, 29, jailed in September for seven years on convictions of breaking the colonial-era Official Secrets Act.

"The government cannot fix the problems if they cannot hear the criticisms," one political activist, Kyaw Ko Ko, told Reuters by telephone.

"Especially with the 2020 election coming, they need to listen to the situation, what is happening among people."

Moscow Talks: Regional powers support aid for Afghanistan, but ask US to pay as well