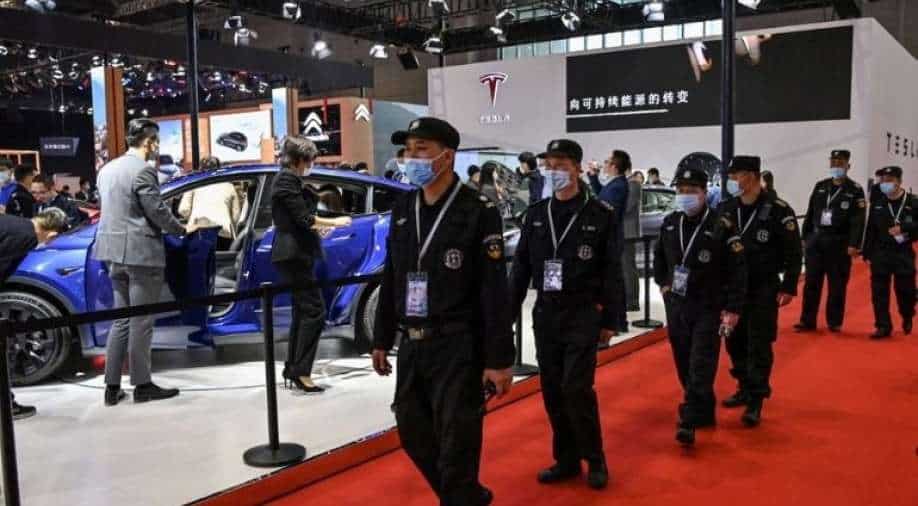 The singling-out of Tesla in China, which accounts for 30 per cent of the US firm's global sales and where it makes cars at its own factory in Shanghai, comes amid ongoing US-China tensions and as other foreign firms have encountered backlash

Elon Musk's Tesla has issued a rare apology after coming under pressure in China on Wednesday from regulators and state media over a viral video of a disgruntled customer at the Shanghai auto show.

The singling-out of Tesla in China, which accounts for 30 per cent of the US firm's global sales and where it makes cars at its own factory in Shanghai, comes amid ongoing US-China tensions and as other foreign firms have encountered backlash.

"China will continue to open up its market to foreign business, but that does not mean foreign companies will be offered any privilege," the Global Times, a tabloid published by the ruling Communist Party's official People's Daily, said in an opinion piece on the "Tesla blunder".

On Monday, an unhappy customer clambered on top of a Tesla at the auto show in protest over the company's handling of her complaints about malfunctioning brakes, triggering a social media storm, with regulators and state media also weighing in.

Late on Wednesday, China's market regulator urged Tesla to ensure product quality in the country, while the official Xinhua news agency said that Tesla's apology was "not sincere".

"The arrogant and overbearing stance the company exhibited in front of the public is repugnant and unacceptable, which could inflict serious damage on its reputation and customer base in the Chinese market," the Global Times write.

Tesla, whose cars are popular in China, declined to comment, but said in a statement it would share data on the brake incident with regulators, after a local regulator demanded it.

In videos that went viral from Monday's car show, a woman wearing a T-shirt emblazoned with the words "The brakes don't work" shouted similar accusations while staff and security struggled to restore calm.

Tesla on Tuesday apologised to Chinese consumers for not addressing the complaint in a timely way, and said it would launch a review of its service operations in the world's biggest auto market.

"A big company should have the responsibility of being a big company, no company can do whatever it wants," it said in a commentary on Wednesday night.

"If a company does not rectify when it has a problem, if it does not change a problematic senior executive ... it will eventually make mistakes again," it said.

On Monday, Grace Tao, a Tesla vice-president, told a local media outlet that "there is no possibility Tesla will compromise" and said she suspected that there was someone putting the customer up to the protest. The interview prompted accusations of "arrogance" on Tesla's part from state media.

Meanwhile, the Global Times published a story on a deadly accident reportedly involving a Tesla that “surfaced online on Wednesday," which it said raises further Tesla quality control concerns.

Chinese internet users last month began calling for boycotts of brands including H&M, Adidas, and Nike over past statements saying they do not use cotton from Xinjiang, where some researchers and foreign lawmakers say authorities use coercive labour to meet seasonal needs, which China denies.