Terror attacks on NYC will bolster jingoism in the US 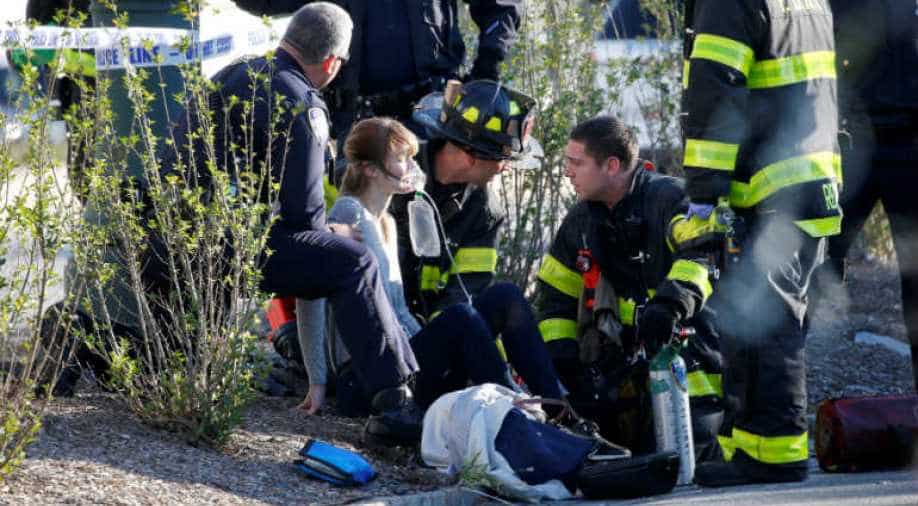 A woman is aided by first responders after sustaining injury on a bike path in lower Manhattan. Photograph:( Reuters )

New York is an intrepid city. One can't but fall in love with it. I for that matter was in complete awe. Having lived and worked there for years, I would marvel at the city's capacity to absorb the most myriad group of ethnic communities across the world. The heinous 9/11 attack did leave its scar on the city but failed to daunt its spirit. While rest of the US has become suspicious of foreigners in different degrees, NYC continues to live up to the unmatched standard of its own cosmopolitanism. An unusual mix of people, culture and religion.

New York is an international symbol of freedom and democracy, and we will not be deterred. #NYCstrong pic.twitter.com/2antds3185

New York's resilience is stronger than a cowardly act of terror. Thinking of the victims, their families, & the responders who saved lives.

No person, no group, no community own NYC. The city belongs to all New Yorkers. And who is a New Yorker? Anyone who lives there, works in the city, share the city's spirit. You don't have to be particularly white, a Jew or an American citizen to be a New Yorker. The city will embrace you. Slowly, with time, as you gain your foothold in that behemoth metropolis, if you start feeling comfortable with its peculiar ebb and flow of life, the city will suck you in. The people make New York City what it is. Not the buildings, shops, the cars or the affluence.

"New York is very much like the movies", the Algerian-French couple pointed out to me as the sun set over the white desert, close to Jordan's border with Saudi Arabia. I agreed in politeness. But the city, in reality, is stranger than celluloid fiction.

In the real world, Italy may have very little to do with China; there could possibly be no overlaps between the languages, cultures, food types of the two countries but just across Mulberry Street, Little Italy and China Town co-exist. How do the residents of two blocs communicate? I have no idea. Do they fight each other? No.

Life in the City is a rich tapestry of diverse colours, designs and motifs. And that is what makes it unique. You cannot essentialise it, reduce it, box it, or simplify it.

This coexistence evident all over the city is not a doing of NYPD alone. Over years, the city has learned to live an eclectic life, slowing growing out of its more violent past. It respects stability but is not hankering for homogeneity. While one can decide to stick to one's culture and language, religion and dress, there is always the possibility of getting enriched by others who are very different. Different but no less.

Life in the City is a rich tapestry of diverse colours, designs and motifs. And that is what makes it unique. You cannot essentialise it, reduce it, box it, or simplify it. The City is a bundle of contradictions.

Yesterday's terrorist attack was a brutal blow to this richness of life, mauling to the ground the values the City stands for. Not only have we lost eight precious lives; we have jeopardised a spirit which is hard to find nowadays because there is so much hate, jingoism, and intolerance.

Let us for a moment not get into the number game by saying, oh, only eight died. I agree many more die in the war zones of West Asia every day. But we cannot for sake of humanity compare lives with lives. Every life lost is a loss. Let us condemn it.

How is killing these people, most of whom are tourists and immigrants, help to maul the military might of the US?

The mindless terror that motivated the assassin appals me. No for god's sake don't try to convince me of the ideological underpinning of the act. It had none. It was not even prompted by an empathy for a cause. The terrorist decided to strike at the hub of New York's tourist destination. It is very much a civilian space too. It is a stone throw away from Wall Trade Center, Wall Street, Anne Frank Museum. Millions of commuter included me, travelled through that locality every day. How is killing these people, most of whom are tourists and immigrants, help to maul the military might of the US?

In his mindless rage, what the assassin might have missed is that such actions make the US an even more paranoid country. The current president is already hellbent to stop immigration with his exclusionary ideology that has little regard for the New York spirit. This attack will give Donald Trump one more and a very big excuse to close the doors and come down hard on other countries whose citizens he is keen on relegating to lives of eternal damnation. It is already evident from Twitter posts how hate is flowing fast and thick

Stop letting these animals in the country!

There will be no freedom when those terrorists will kill us all??

My only plea today is if you wish to fight hegemony, violence, hatred, then think carefully and resist strategically. Killing innocent lives does not help whatever cause you are fighting for, it does not defeat your mighty opponent and, the worst is, you only help to bolster jingoistic responses. More importantly, you end up killing a spirit which you may actually want to champion, at least for the sake of a more tolerant world.