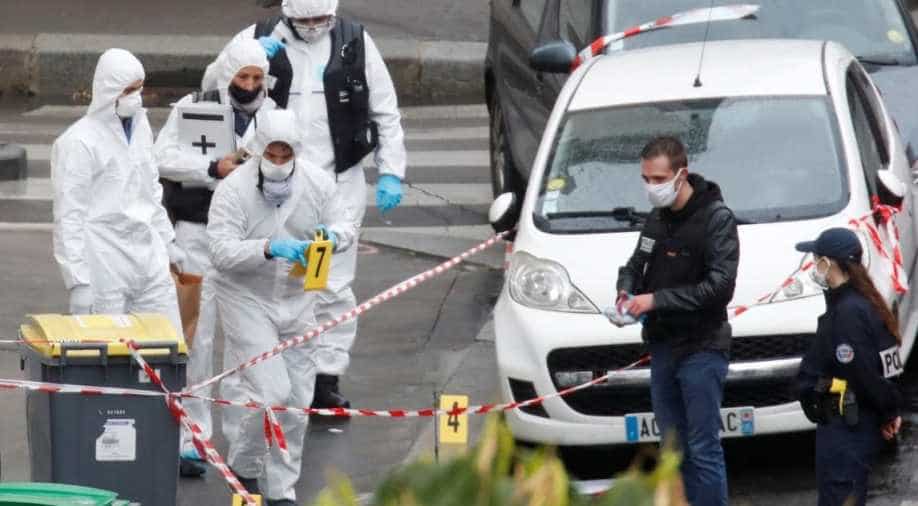 Forensic experts work at the scene of a stabbing attack near the former offices of French magazine Charlie Hebdo, in Paris, France  Photograph:( Reuters )

The suspect, who is from Pakistan, was arrested soon after two people were wounded in front of the old offices of the Charlie Hebdo magazine.

French investigators are studying a video claiming responsibility for the meat cleaver attack in Paris that targeted satirical weekly Charlie Hebdo as the government condemned an act of "Islamist terrorism".

Six people were still in custody, including the suspected perpetrator of Friday's attack that left two badly wounded outside Charlie Hebdo's former offices in Paris.

The suspect, who is from Pakistan, was arrested soon after two people were wounded in front of the old offices of the Charlie Hebdo magazine. Officials said his clothes were spattered in blood.

Investigators said the assailant had identified himself as Hassan A., an 18-year-old born in Pakistan. But in a video in which he said he was targeting the satirical weekly Charlie Hebdo, the scene of a massacre by Islamist gunmen in January 2015, the man said his name was Zaheer Hassan Mehmood.

The video was found on the suspect's mobile phone, French media reported. A police source confirmed a video was being examined.

In the video, the suspect identifies himself as Zeheer Hassan Mehmood and says he came from Mandi Bahauddin in Punjab province. Starting to sob, he then recites poetry praising the Prophet Mohammad.

"If I'm sounding emotional, let me explain: here, in France, the caricatures of the Prophet Mohammad were made," he says in Urdu. "I am going to do (an act of) resistance today, September 25."

"My heart is filled with happiness," Arshad Mehmood told the online news site Naya Pakistan from the family home. "I can sacrifice all my five sons to protect the Prophet's honour."

"He called us ... and said that the God's Prophet had chosen him, and assigned him to kill the blasphemers."

The attack came three weeks into a trial of suspected accomplices of the authors of the January 2015 attacks on Charlie Hebdo, a policewoman, and a Jewish supermarket.

Seventeen people were killed in the three-day spree that heralded a wave of Islamist violence in France that has so far claimed 258 lives.

Interior Minister Gerald Darmanin acknowledged that the authorities could have become complacent over the terror risk after a relative lull in high-profile attacks in recent years.

"We are in an extremely critical situation, we are at war with Islamist terrorism. Maybe, collectively, we put this behind us," he said.

Darmanin said the threat was still real, noting 32 attacks had been foiled over the last three years. "It is around once a month," he said.

President Emmanuel Macron's centrist government has in recent weeks begun using increasingly tough rhetoric on domestic security issues in what analysts see as a shift to the right.

The weekly, which moved to a secret location after the attack, republished the cartoons earlier this month to mark the beginning of the trial of 14 people with alleged links to the Charlie Hebdo killers.

For Muslims, any depiction of the Prophet is blasphemous.

Wearing a long tunic, the suspect said he was spiritually guided by Ilyas Qadri. Qadri is a Sunni cleric and the founder of Dawat-e-Islami, a non-violent organisation spread across the globe.

Qadri says a person who commits blasphemy should be handed in to police, but if another individual were driven by their emotions to kill the blasphemer, the law should not apply.

Dawat-e-Islami did not immediately respond to a request for comment.

The cartoons were first published by Charlie Hebdo in 2006 and spurred Islamist militants to target the magazine's office in 2015 in an attack that left 12 people dead and was claimed by al Qaeda.