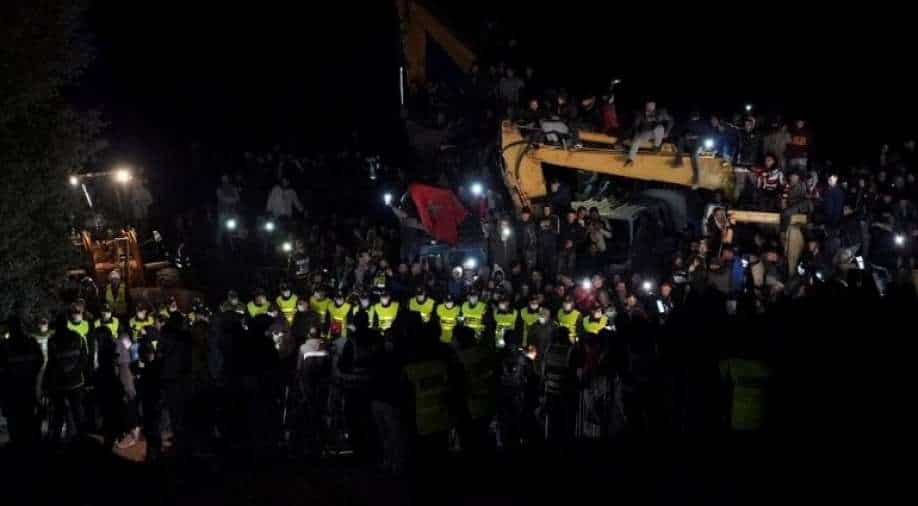 5-year-old Moroccan boy, who was trapped in well, died before rescue. Photograph:( Reuters )

Social media footage showed the scene when his body was recovered. Hundreds of distraught rescue workers and onlookers, who had gathered at the site, could be seen chanting to god. They also shined their phones’ flashlights into the air. King Mohammed gave his condolences to the parents, state media reported.

Five days of strenuous efforts made to rescue a small boy trapped in a well in northern Morocco seems to have gone down the drain as the child died before rescuers could reach him.

The rescuers reached him late on Saturday and retrieved the body, two government officials said.

Footage from the scene shows when his body was recovered. In it, hundreds of distraught rescue workers and onlookers, who had gathered at the site, could be seen chanting to god. They also shined the phones’ flashlights into the air.

The five-year-old Rayan Awram had fallen into the well at Ighran village in the hills near Chefchaouen on Tuesday. The incident had triggered a huge rescue effort.

#Rayan died…
Sadly, the 5 years old boy in #Morocco that has been trapped for over five days in a well, first responders worked so hard trying to save him… he passed away. pic.twitter.com/T6oyCjtKWG

After removing much of the adjacent hillside and tunnelling delicately a horizontal passage into the well, rescuers finally reached him late on Saturday.

Crowds had also gathered in a vigil at the scene to stay abreast with the rescue effort as hundreds of workers toiled to save the child.

Rest In Peace Rayan, a 5-year-old boy pulled from a well in Morocco has died, he had been trapped for four days.
Can’t begin to imagine how heartbroken his parents must be after lingering between hope and fear for five days💔 Respect for those rescue workers who gave all they got pic.twitter.com/75nEV3XFis

Numerous Moroccans also followed the efforts on television. "I am so sad to learn Rayan has died. Sincere condolences to the parents," said Abderrahim Sabihi, a Rabat resident, who was following the rescue effort.