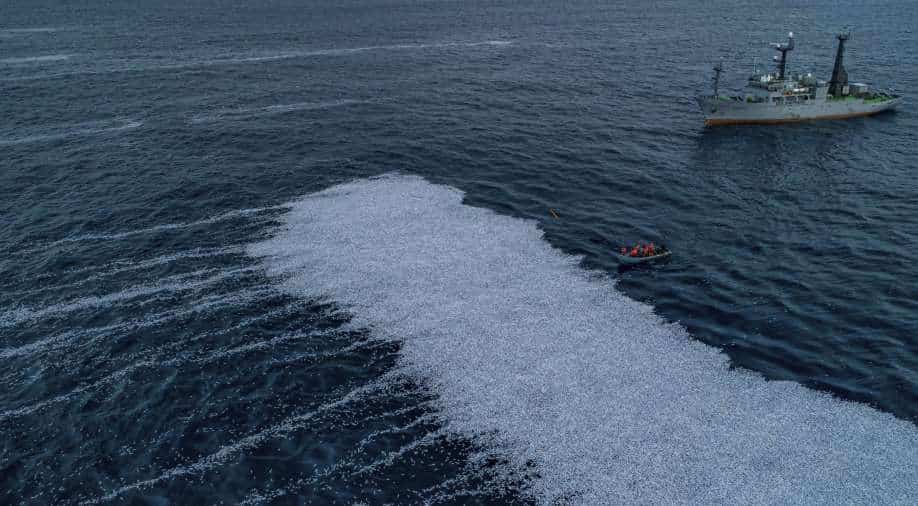 The spill, which took place in early Thursday, was caused by a tear in the trawler’s net Photograph:( Twitter )

A Dutch-fishing vessel, the world’s second-biggest fishing trawler, dumped more than 100,000 dead fish into the Atlantic Ocean off the French coast, sending shockwaves across the country.

France fisheries minister Annick Girardin said the images were shocking and that there would be an investigation to find out whether the incident was deliberate.

The spill, which took place in early Thursday, was caused by a tear in the trawler’s net, said fishing industry group Pelagic Freezer-Trawler Association (PFA), which represents the vessel's owner.

In a statement, the group called the spill a “very rare occurrence”.

Environmental activists have often criticised such trawlers for using drag nets for more than a kilometre long and processing the fish in onboard factories.

The dumped fish were blue whiting, a sub-species of cod, which is used by the industry to mass-produce fish fingers, fish oil and meal.

The French arm of campaign group Sea Shepherd first published images of the spill, showing the ocean's surface covered by a 3,000 sq m.

Environmental activists who spotted the fish described it as a “floating carpet of carcasses”.

Sea Shepherd France, a non-profit, marine conservation activism organization, said it did not believe that the incident was accidental, reported The Guardian.

The organisation claimed that the trawler deliberately discharged the fish as it did not want to process, a practice known as discharging bycatch which is banned under EU fishing rules.