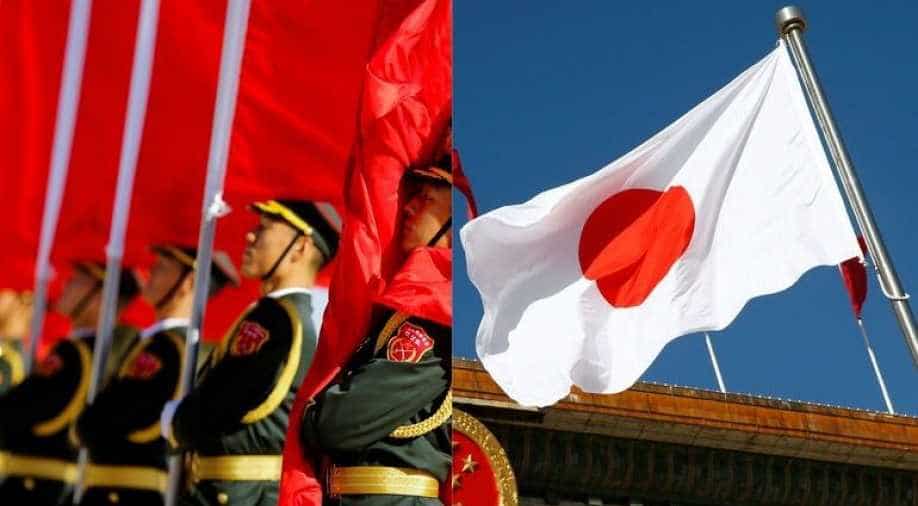 Honour guards hold red flags as they stand at attention before a welcoming ceremony for the Japanese Prime Minister Shinzo Abe in Beijing (left). Japan's flag outside the Great Hall of the People in Beijing (right). Photograph:( Reuters )

Motegi urged China to halt its illegal intrusions into its territorial waters around the Senkaku Islands in the East China Sea and address the human rights issues in Xinjiang and the ongoing political situation in Hong Kong.

The Chinese government has urged Japan to steer clear of "internal issues” including Hong Kong and Xinjiang as Japanese Prime Minister Yoshihide Suga prepares to meet US President Joe Biden later this month.

Motegi urged China to halt its illegal intrusions into its territorial waters around the Senkaku Islands in the East China Sea and address the human rights issues in Xinjiang and the ongoing political situation in Hong Kong.

In a rare move, the Chinese Foreign Ministry put out a two-part statement on the phone call between Wang and Motegi.

One statement criticised US President Biden's recent efforts to coordinate with allies on a joint strategy on China, warning Tokyo to avoid following the US in sanctioning China over alleged human rights abuses in Xinjiang and Hong Kong.

"If under the guise of multilateralism, countries engage in bloc politics or big power confrontations, or even arbitrarily impose unilateral and illegal sanctions on other countries based on false information, the world will regress to the law of the jungle of right and wrong," said Wang.

"The will of certain superpower does not represent the international community; the small number of countries that follow this country do not have the right to monopolise the rules of multilateralism."

In another statement released on the same day by the Chinese Foreign Ministry, Wang repeated his jab at the US, urging Japan to not get "carried away" by countries that were biased against China.

According to SCMP, China's warning comes as Japan has shown signs of taking an increasingly assertive role in the Indo-Pacific region. The tension between China's People's Liberation Army (PLA) and the Japanese Maritime Self-Defence Force (SDF) in the East China Sea has escalated in recent months following Tokyo repeatedly voicing concerns over China's new coastguard law.

Japan Prime Minister Yoshihide Suga and Biden are expected to meet later this month to discuss human rights in China. Suga will be the first foreign leader to meet Biden after taking office as POTUS.

Motegi and Japan Defence Minister will reportedly have discussions with Germany while Suga is in Washington, a move observers have said shows Tokyo is trying to get more powerful nations to recognise Japan's sovereignty in the Diaoyu Islands.

Last month, Japan said China's coastguard had expanded its presence in the contested waters by entering twice a month and as frequently as twice a week near the Japanese-controlled Senkaku Islands, known by the Chinese as Diaoyu.