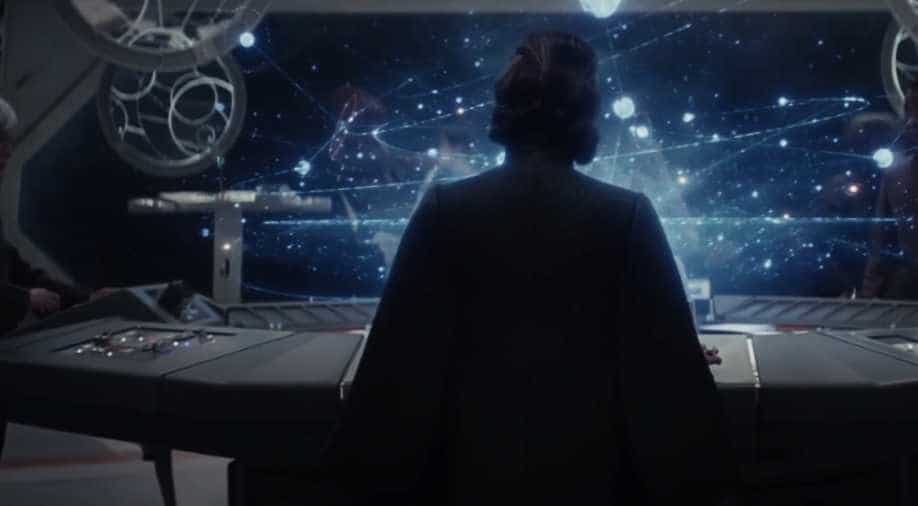 A still from the trailer of 'Star Wars: The Last Jedi'. Image courtesy: YouTube Photograph:( Others )

Disney debuted its highly-anticipated first trailer for "Star Wars: The Last Jedi" at a fan event in the United States on Friday, sending the internet into a frenzy of excitement -- and speculation.

The footage from the eighth installment in the blockbuster space opera, due for release on December 15, was shown at the "Star Wars Celebration" gathering in Orlando marking the 40th anniversary of the original movie.

The 132-second clip teases Luke Skywalker's first meeting with Rey as he teaches her the ways of the Force, opening with the young apprentice on the island where fans saw her find Luke at the end of "The Force Awakens."

"Breathe, just breathe. Now, reach out. What do you see?" says a mysterious male voice as the camera focuses on a breathless Rey (Daisy Ridley) on her hands and knees beneath a cliff face.

"It's so much bigger," the voice says.

"I only know one truth. It's time for the Jedi -- to end," says the voice, which seems likely to be Luke (Mark Hamill).

The first fully-formed trailer for "The Last Jedi" had almost half a million views and more than 13,000 comments on YouTube within 90 minutes of being posted, with #TheLastJedi quickly becoming the top trending hashtag worldwide on Twitter.

Directed by Rian Johnson ("Looper," "Brick"), "The Last Jedi" was filmed on the west coast of Ireland and at Pinewood Studios near London, which Johnson described as being "like Camelot... this mythical place" as he was growing up.

The movie sees the return of the characters introduced in 2015's seventh installment, including Rey, Poe Dameron (Oscar Isaac), Finn (John Boyega) and a few members of the original crew, including Luke.

The trailer serves up a cameo from the iconic Millennium Falcon in a dogfight with TIE fighters and there's also lightsaber-wielding bad guy Kylo Ren as well as Poe, Finn and droid favorites BB-8 and R2-D2.

The film also stars Carrie Fisher as General Leia Organa, who appears briefly from behind in the trailer.

Fisher died in December but had wrapped shooting "The Last Jedi" before her death, and was honored with a video tribute as the convention opened Thursday as well as an appearance by her daughter, actress Billie Lourd, in a mini-version of her mother's iconic Leia gown.

Johnson paid tribute to Fisher -- who had a career parallel to her acting as a writer and highly regarded script editor -- revealing that she helped him with much of the dialogue.

"I love her so much, man, I just adore her, and I connected with her first and foremost as a writer. She's a brilliant writer, an incredible mind. I'd go to her house and we'd sit on her bed for hours and go through the script," he said.

"We'd have these stream-of-consciousness jazz poetry ad-lib sessions and I would just scribble on my script everything she said. And then, at the end of six hours, there would be like a four-word line of dialogue."

Fans had been lining up on the sidewalk overnight to get into the event, hosted by "Frozen" actor Josh Gad and featuring Ridley, Boyega, Johnson and Lucasfilm chief Kathleen Kennedy.

Johnson unveiled a new star, Kelly Marie Tran, who plays Rose, a maintenance worker who is part of the resistance.

Tran revealed that she had told her family she was doing "an indie movie in Canada" -- such has been the secrecy surrounding the film.

Hamill -- a central figure in the original trilogy -- told the crowd it was a pleasure to be able to enjoy the prequel films and last year's "Rogue One" spin-off without the pressure of actually having to carry them.

The actor said he had admitted to Johnson that trying to capture "lightning in a bottle" again was a prospect that "terrified" him -- and he was relieved to find the director felt the same way.

"To a certain extent, it's not Luke's story anymore. But I think he's an important part to the overall arc of the saga and again, there's a lot of mystery about him, even within the film," said Hamill.

This prompted Kennedy to insist that Hamill was "Mr Modesty," and tell the audience: "He is so significantly important to this next film."