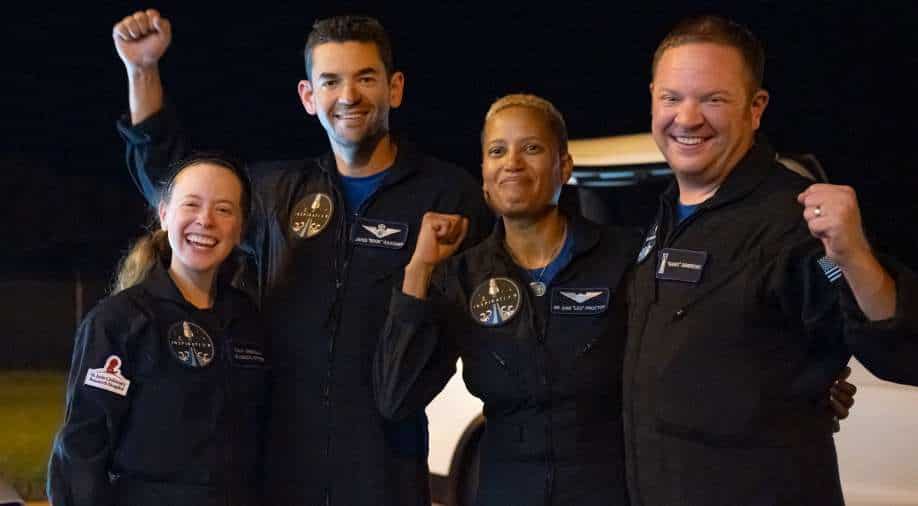 The SpaceX Dragon capsule's heat shield allowed it to withstand the descent before it was slowed down by four large parachutes and then splashed into the ocean just after 7:00 pm

SpaceX's Inspiration4 mission is now officially a success. The four SpaceX tourists landed in the Atlantic Ocean off the coast of Florida Saturday evening after spending three days in space, successfully concluding the first orbital mission in history with no professional astronauts on board.

The SpaceX Dragon capsule's heat shield allowed it to withstand the descent before it was slowed down by four large parachutes and then splashed into the ocean just after 7:00 pm.

"That was a heck of a ride for us, and we're just getting started," said billionaire captain Jared Isaacman, who financed the trip.

The stated goal of the mission, called Inspiration4, was to encourage the democratisation of space by proving that the cosmos are accessible to crews that have neither been handpicked nor in training for years.

The Dragon capsule travelled farther than the International Space Station (ISS) at an orbit of about 575 kilometres (357 miles) high, and circled the globe more than 15 times each day.

This marked the debut flight of SpaceX owner Elon Musk's new orbital tourism business, and a leap ahead of competitors likewise offering rides on rocket ships to customers willing to pay a small fortune for the exhilaration - and bragging rights - of spaceflight.

Isaacman has paid an undisclosed sum to fellow billionaire Musk to send himself and his three crewmates aloft. Time magazine has put the ticket price for all four seats at $200 million.

Inspiration4 aimed for an orbital altitude of 360 miles (575 km) above Earth, higher than the International Space Station or Hubble Space Telescope, and the farthest any human will have flown from Earth since the end of NASA's Apollo moon program in 1972, according to SpaceX.