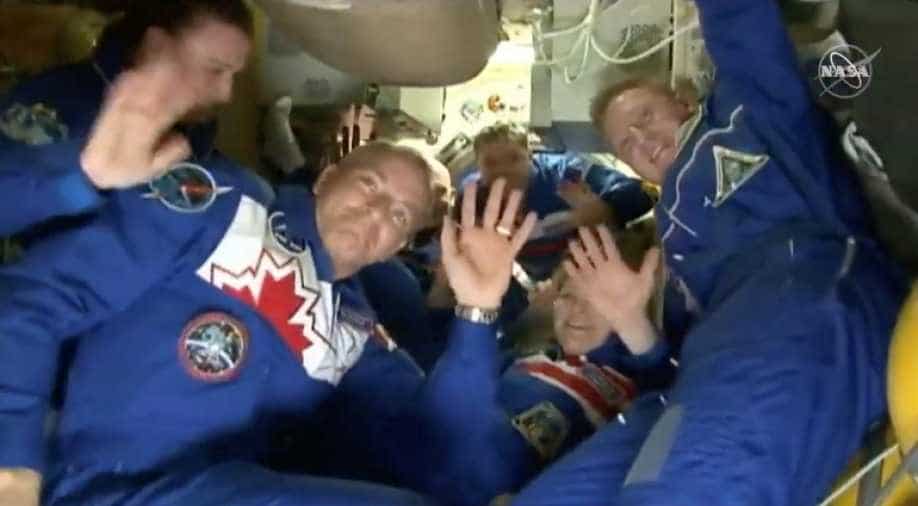 The Russian, American and Canadian astronauts who travelled on board the Soyuz will spend six-and-a-half months on the International Space Station.

A Soyuz spacecraft carrying Russian, American and Canadian astronauts arrived at the International Space Station on Monday, following the first manned launch since a failed launch in October.

Russian cosmonaut Oleg Kononenko, Anne McClain of NASA and David Saint-Jacques of the Canadian Space Agency blasted off from Kazakhstan's Baikonur Cosmodrome earlier in the day.

They successfully docked at the ISS on schedule at 1736 GMT to begin an expected six and a half months aboard the ISS, the Russian Roscosmos space agency said via Twitter.

It was the first manned voyage for the Soviet-era Soyuz since October 11, when a rocket carrying Russia's Aleksey Ovchinin and US astronaut Nick Hague failed just minutes after blast-off, forcing the pair to make a harrowing emergency landing.

They escaped unharmed but the failed launch -- the first such incident in Russia's post-Soviet history -- raised concerns about the state of the Soyuz programme.

The Soyuz is the only means of reaching the ISS since the United States retired the space shuttle in 2011.

Kononenko, McClain and Saint-Jacques smiled and gave thumbs up to the cheering crowd including relatives as they ascended into the Soyuz capsule on Monday morning.

Minutes after take off, Roscosmos said the capsule was in orbit. NASA administrator Jim Bridenstine meanwhile thanked the US and Russian teams "for their dedication to making this launch a success".

Risk 'part of our profession'
In a successful rehearsal for Monday's flight, a Soyuz cargo vessel took off on November 16 from Baikonur and delivered several tonnes of food, fuel and supplies to the ISS.

Russia said last month the October launch had failed because of a sensor damaged during assembly at the Baikonur cosmodrome, but insisted the spacecraft remained reliable.

While flight commander Kononenko is beginning his fourth mission to add to an impressive 533 days in space, both Saint-Jacques and McClain are making their maiden trip.

Crew commander Kononenko, 54, said during a press conference on the eve of the launch that "risk is part of our profession".

But he added that his team "absolutely" trusted those who had prepared for the flight.

European Space Agency astronaut Alexander Gerst, NASA's Serena Aunon-Chancellor and Sergei Prokopyev of Roscosmos were set to greet the trio on arrival at the ISS.

Veteran Kononenko said the crew would conduct a spacewalk on December 11 as part of an investigation into a mysterious hole that has caused an air leak on the ISS.

While on board, Saint-Jacques will be involved in an experiment called "At Home in Space" which "takes a closer look at how crew members adapt to living with each other by creating a shared culture," according to the Canadian Space Agency.

Among the dozens of other experiments the new crew members will take part in is one that will use worms to examine muscle loss in space, led by British scientists.

The experiment could pave the way to new treatments for muscular conditions for people on Earth, according to the UK Space Agency.

'Spacewalking like rugby'
McClain, 39, served in Iraq and has represented the United States in women's rugby.

She has said that training to spacewalk resembled the sport since it demands "grit, toughness, mental focus, and more".

Russia-US cooperation in space has remained one of the few areas not affected by a crisis in ties between the former Cold War enemies.

But comments by the combative chief of the Russian space agency, Dmitry Rogozin, have raised eyebrows.

He recently joked Russia would send a mission to the Moon to "verify" whether or not NASA lunar landings ever took place.

In recent years Russia's debt-laden space industry has suffered a number of mishaps including the loss of cargo spacecraft and satellites.

At a press conference following the successful docking, Rogozin announced March 1, 2019, as the date for the next manned launch to the ISS.

He said Ovchinin and Hague would be on board, along with NASA's Christina Koch.