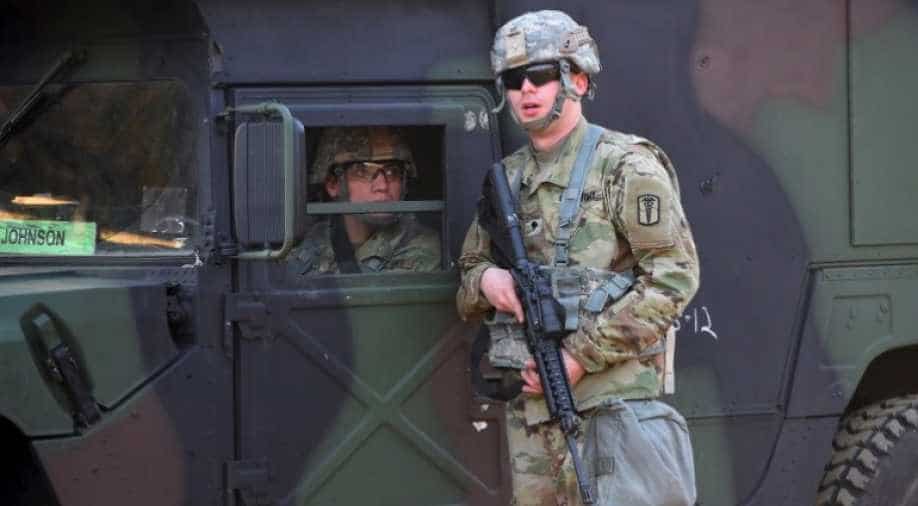 File photo of US troops in South Korea. Photograph:( AFP )

More than 28,000 US troops are stationed in the South to guard against nuclear-armed North Korea, part of a Seoul-Washington security alliance in place since the Korean war ended with an armistice instead of a peace treaty.

Sales at Kim Chang-bae's hardware shop in South Korea rise every year thanks to Camp Humphreys, an enormous US military base he is frightened will close in the wake of the summit between Kim Jong Un and Donald Trump.

More than 28,000 US troops are stationed in the South to guard against nuclear-armed North Korea, part of a Seoul-Washington security alliance in place since the Korean war ended with an armistice instead of a peace treaty.

But with talks between the North Korean and US leaders in Hanoi just days away, speculation is building that the pair could agree to a treaty in return for denuclearisation measures from Pyongyang -- and that the withdrawal of US troops might follow.

For South Koreans dependent on US troops to make a living -- like Kim Chang-bae -- that is a worrisome prospect.

"Without the presence of US soldiers, many businesses, including mine, will lose their main source of income," said Kim, who sells bolts and screwdrivers to Americans stationed at Camp Humphreys, 60 kilometres south of Seoul.

"It's a nightmare scenario."

Camp Humphreys, in the city of Pyeongtaek, is the US' largest overseas military base, stretching across 14.7 square kilometres to accommodate 32,000 people -- soldiers and their families.

The camp -- home to almost all of the US troops in South Korea -- boasts a fleet of Blackhawk and Apache helicopters, a bowling alley, an 18-hole golf course, multiple schools, churches and cinemas.

Hundreds of restaurants and shops ranging from nail salons to tattoo parlours have set up around the base, which is in the final stages of an expansion project that will see its capacity rise to 43,000 people by 2022.

"It does worry me that they could leave the country," said Choi Eun-hee, who has run a Turkish restaurant just a few steps from Camp Humphreys for a decade. "At least 80 per cent of our customers are US soldiers".

Choi, 43, attended a rally last month, where dozens from the community demanded US troops remain.

When AFP visited, banners reading "Anti-Americans, Get Out" and "We Go Together" were strung up among a cluster of American and South Korean flags.

Shop owner Kim, 57, who is head of the local merchants' association representing 230 business owners, said Americans in uniform had become a "hallmark of the city's character".

If the war were to be officially declared over at the Hanoi summit -- the second between Trump and Kim after the two met in Singapore last year -- and a peace treaty subsequently signed, Pyongyang could raise objections over the presence of US troops in the South, analysts say.

South Korean president Moon Jae-in has tried to quell concerns, saying in January that the North Korean leader had told him the end of war declaration had "nothing to do" with US forces in the South.

"Kim Jong Un understands that the issue is entirely up to the decision of South Korea and the US," Moon said.

"North Korea is expected to say the US military presence in the South poses a serious threat to its security... It could claim true peace is only possible when US troops are out of here."

Even if a peace treaty is not secured in Hanoi, there is no guarantee US troops will remain with a highly unpredictable president at the helm who has flip-flopped on the issue of their long-term stay.

Trump said on Friday that reducing US forces in the South "was not one of the things on the table" at the summit -- but he has repeatedly complained about the expense of keeping them there.

Seoul agreed earlier this month to hike its payment for maintaining the troops on its soil, but since the new deal is only valid for one year, the two sides may soon have to return to the negotiating table.

Song Wol-sook, 46, who runs a nail salon, said US withdrawal would leave South Koreans feeling isolated and alone in their own city, with a bleak future.

"It will leave pretty much every business here in ruins, including mine."