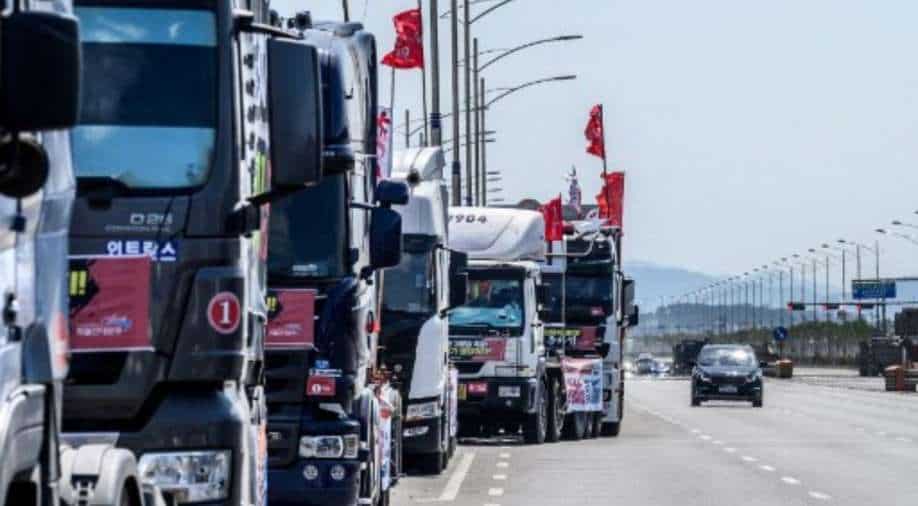 The industrial action is the latest headache for global supply chains, already strained by prolonged COVID-19 lockdowns in China and Russia's invasion of Ukraine

South Korean truck drivers staged an eighth day of protests Tuesday over rising fuel costs that have further snarled global supply chains, with the government warning their actions had caused more than $1 billion in losses.

The strike has disrupted shipment and production for the crucial steel, petrochemical and automobiles industries, causing about 1.6 trillion won ($1.2 billion) in losses, according to data from Seoul's trade ministry.

The industrial action is the latest headache for global supply chains, already strained by prolonged COVID-19 lockdowns in China and Russia's invasion of Ukraine.

The drivers stopped work last week and have disrupted ports and factories in Asia's fourth-largest economy as they protest against the ending of a minimum wage guarantee and rising costs.

"All we are asking for is to remove the uncertainty in our lives," Cho Jeong-jae, a member of the Cargo Truckers Solidarity Union, told AFP Tuesday.

The truckers say they are "desperate" due to sharp rises in fuel costs -- with inflation in South Korea at its highest level in over a decade according to official data last month.

"When fuel prices drop, it's reflected very quickly by lowering freight fees," Cho said. "But that's not the case when fuel prices rise. Our livelihood is at stake."

Loud music blared out from a van parked near a port in Incheon on Tuesday, AFP reporters saw, as dozens of trucks lined up the road, flying flags hoisted on bamboo canes.

Similar protests were happening across the country as of Monday, more than 7,000 people took part in the protests at 14 locations, according to the land ministry.

Negotiations are ongoing, but the government has come under fire for its "hostile" policy towards workers, which critics say is fuelling the tensions.

On the campaign trail, Yoon a political novice had vowed to deal "strictly" with labour disputes and indicated he was more pro-business on issues such as minimum working hours.

As of Monday, 23 members of the Cargo Truckers Solidarity Union had arrested for committing "illegal activities" such as "interfering" with normal vehicle operation, according to the country's transport ministry.