Slated to be first woman US vice-president, Harris vows 'will not be the last' 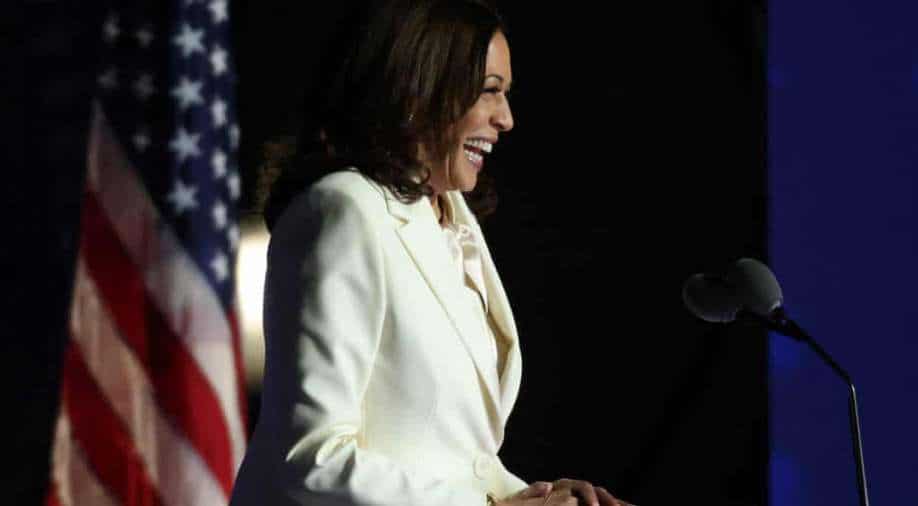 Harris took the stage in Wilmington, Delaware in a white suit in honour of the women's suffragist movement to the sounds of Mary J Blige.

US Vice President-elect Kamala Harris declared her victory was just a beginning for women as she was elected to be the top-ranking female leader in US history.

Harris said voters had brought a "new day for America" as she opened a victory speech on Saturday with President-elect Joe Biden.

Harris was all praise for Biden, as she introduced the president-elect at a victory rally in Delaware.

"What a testament it is to Joe's character that he has the audacity to break one of the most substantial barriers that exists in our country, and select a woman as his vice president. But while I may be the first woman in this office, I will not be the last. Because every little girl, watching tonight sees that this is a country of possibilities.

"And to the children of our country, regardless of your gender, our country has sent you a clear message: Dream with ambition, lead with conviction and see yourselves in a way that others may not simply because they've never seen it before, but know that we will applaud you every step of the way."

Harris arrived in a motorcade flashing red and blue lights, the first sign that the earth has shifted from beneath the Donald Trump-Mike Pence White House. When she spoke, Harris offered glimpses of the incredible promise of multicultural America.

"Every little girl watching tonight sees that this is a country of possibilities," Harris said to wild cheers.

Harris took the stage in Wilmington, Delaware in a white suit in honour of the women's suffragist movement to the sounds of Mary J Blige.

"When our very democracy was on the ballot in this election, with the very soul of America at stake and the world watching, you ushered in a new day for America," Harris said to cheers from the socially distanced outdoor crowd.

"Congressman John Lewis, before his passing, wrote democracy is not a state. It is an act. And what he meant was that America`s democracy is not guaranteed. It is only as strong as our willingness to fight for it. To guard it, and never take it for granted and protecting our democracy takes struggle. It takes some sacrifices, but there is joy in it. And there is progress. Because we, the people, have the power to build a better future," she added.

Harris' mother Shyamala Gopalan came in for a special mention.

"My mother Shyamala Gopalan Harris, who is always in our hearts. When she came here from India at the age of 19, she could not have imagined this moment. But she believed so deeply in America, where a moment like this is possible. And so I'm thinking about her, and about the generations of women, Black women, Native American women who have paved the way for this moment tonight," she said.

Harris vowed to honour her position, adding she would be for Biden what he was for former president Barack Obama.

"And to the American people. No matter who you voted for. I will strive to be a vice president, like Joe was to President Obama: loyal, honest, and prepared waking up every day thinking of you and your family. Because now is when the real work begins, the hard work, the necessary work, the good work, the essential work to save lives and beat this epidemic to rebuild our economy," she said.

Biden was seen hugging his family as fireworks exploded overhead. A series of drones also flew overhead and made the shape of the US and "BIDEN."