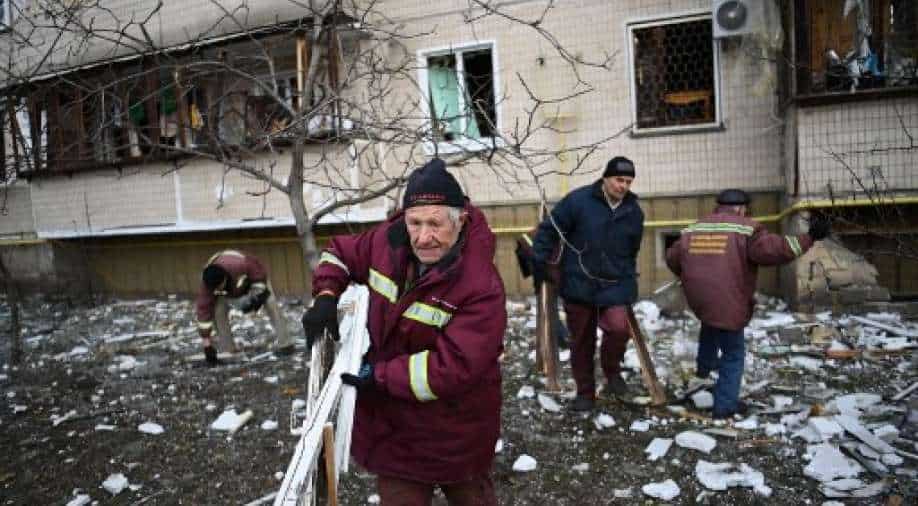 People clear debris at a damaged residential building at Koshytsa street in a suburb in Kyiv Photograph:( AFP )

Ukraine's defence forces said it had "repulsed" an attack on the capital's Victory Avenue as Russian continued its assault on Ukraine.

As Russia continued its strikes on Ukraine, the Zelenksy government said a Moldovan-flagged chemical tanker and a Panamanian-flagged cargo ship was hit by missiles from Russian warships near the Odessa port in the Black Sea.

Ukraine's defence forces said it had "repulsed" an attack on the capital's Victory Avenue.

As the battle for Kyiv intensified, residents armed themselves as the government said anyone between the age of 18 and 60 could pick up a gun and get ready to fight.

Reports claimed Russian soldiers were trying to capture the city's electricity generating plant with the war raging inside the capital. Reports said intense gunfire and artillery rounds could be heard in capital Kyiv.

Watch: Kyiv residents rush to bunkers amid reports of explosions

Amid the fighting, Ukrainians sought shelter in underground Metro stations and in nearby churches as residents continued to seek safety from the escalating Russian attacks.

Reports said Ukrainians began fleeing to Romania driving in trucks and cars mostly comprising of women and children with men banned from leaving the country due to the fighting.

Reports said Russian and Ukrainian forces were engaged in heavy fighting in the northern district in the country's capital. Amid the fierce fighting, the Czech Republic, Poland and Bulgaria announced they would be closing their airspace to Russian carriers.

"As of midnight today, we are halting the traffic of all Russian airline companies in Czech airspace," transport minister Martin Kupka said as Poland declared that the "ban will apply from midnight".

Bulgaria said it will close its airspace to Russian carriers due to "the worsening military conflict and in solidarity with Ukraine."

Russian forces unleashed a three-pronged attack on Ukraine from the north, east and south as tanks entered the breakaway regions. Russian forces said that Hostomel airfield near Kyiv was annexed on Friday as it launched its ground attack on Kyiv.