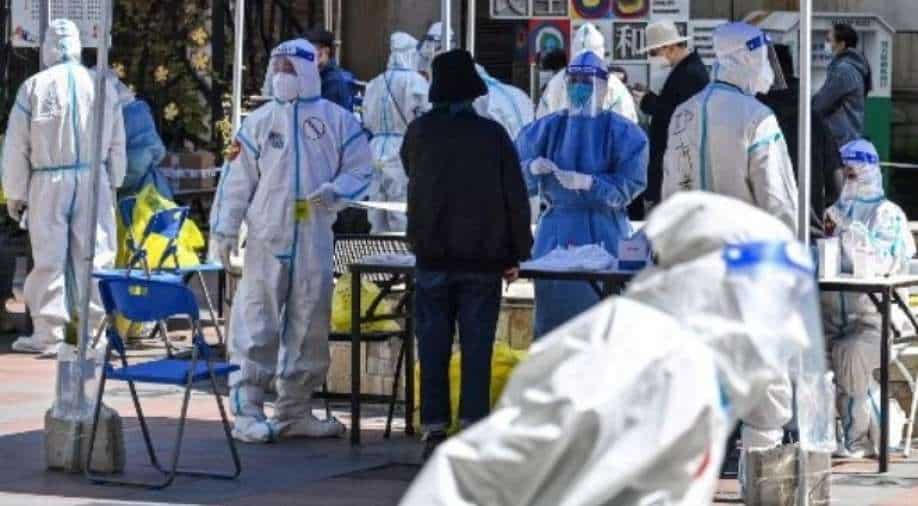 Workers and volunteers look on in a compound where residents are tested for the Covid-19 coronavirus during the second stage of a pandemic lockdown in Jing' an district in Shanghai. Photograph:( AFP )

The move is targeted towards decreasing the pressure on the Shanghai health workers and to focus on the medical and mental health conditions in the isolation sites in both provinces.

Shanghai has sent 12,111 people who were close contacts or people who had come in contact with COVID-19 positive patients to the province of Zhejiang, according to Xinhua press agency.

The two neighbouring Chinese provinces reached an arrangement in the wake of the rise in cases in Shanghai recently to transfer and isolate almost 30,000 potentially infected people in the cities of Taizhou, Huzhou, Hangzhou, Jinhua and Ningbo, according to the report by Xinhua.

The move is targeted towards decreasing the pressure on the Shanghai health workers and to focus on the medical and mental health conditions in the isolation sites in both provinces.

The supply system in Shanghai – the financial hub of China – has taken a considerable hit due to the tough restrictions due to the rising COVID-19 cases. According to the new rules, only the health workers, delivery people and individuals with special permission are allowed to move in the city.

This has resulted in a severe crisis of distribution despite the city having a good reserve of both rice and meat, Shanghai's vice mayor Chen Tong said at a news conference on Thursday.

No Covid XE variant in India yet, government clarifies

According to Reuters, Tong also said that the city is looking to reopen a number of wholesale markets and food shops with the help of more people to take care of the delivery.

"In response to the various problems reported by the public, we have been holding meetings overnight to try and figure out solutions," he was quoted as saying by the Reuters report.