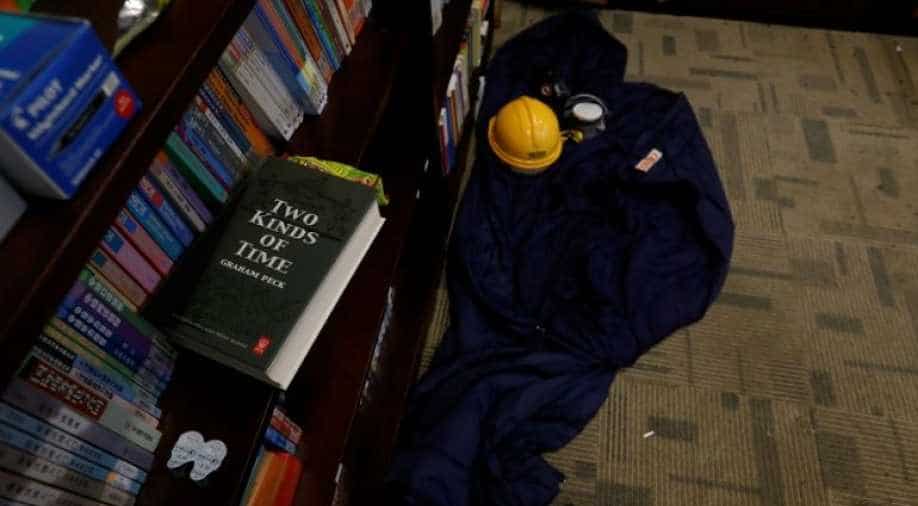 FILE PHOTO: A helmet, gas mask, and sleeping of a protester is left behind in the library of in Hong Kong Polytechnic University (PolyU) in Hong Kong Photograph:( Reuters )

China's foreign ministry said in a statement that Wang, China's state councillor, told former US Secretary of Defense William Cohen during a meeting in Beijing that China will never allow anyone to undermine its "one country two systems" principle.

The Hong Kong police said on Wednesday that they intend to stick to peaceful solutions to the standoff at the Hong Kong Polytechnic University (PolyU).

Ho Yeung-sing, Chief Superintendent and Commander of Yau Tsim District of the Hong Kong Special Administrative Region, made the statement outside the PolyU campus, calling protesters to drop their weapons and leave the campus in a peaceful manner.

Additionally, Justice Secretary Teresa Cheng Yeuk-wah, said Hong Kong Special Administrative Region will uphold the ‘one country, two systems’ principle and will work to rebuild its image, during a press conference inside the Chinese embassy in London Wednesday.

The chief superintendent said the police that they had names of around 300 people under the age of 18 who had left the university. He added that while 700 protesters had been arrested, there was still a small group which was refusing to come out.

He said efforts are being made to clear obstructions and police are keeping maintaining communication with the leaders of different groups. He noted ambulances and first-aid staff are allowed to do their work, and police are now waiting for the remaining protesters to leave the campus voluntarily.

''Apart from peaceful means, we also adopt a feasible approach to solve the problem. In this regard, we made a special arrangement for underage people. As long as they give up their weapons and leave the campus in a peaceful manner, we do our best in this regard, but we'll record their personal details and then let them go. But, of course, we will reserve the rights to pursue a case later," said Ho.

The protesters gathered at the PolyU campus on November 11, committing violent acts such as hurling gasoline bombs and shooting arrows at police and government supporters.

"Increasing violence in Hong Kong has continuously affected our core values and the international community's confidence in Hong Kong. This impacts Hong Kong's rule of law. Only through fortifying the implementation of the 'one country, two systems' principle by ourselves and rebuild our home, can we see the Hong Kong that we know once again," said Cheng.

Initially, the protests were triggered by a controversial bill that would have allowed extradition to China, but eventually morphed into a full-fledged movement asking for democracy in Hong Kong.