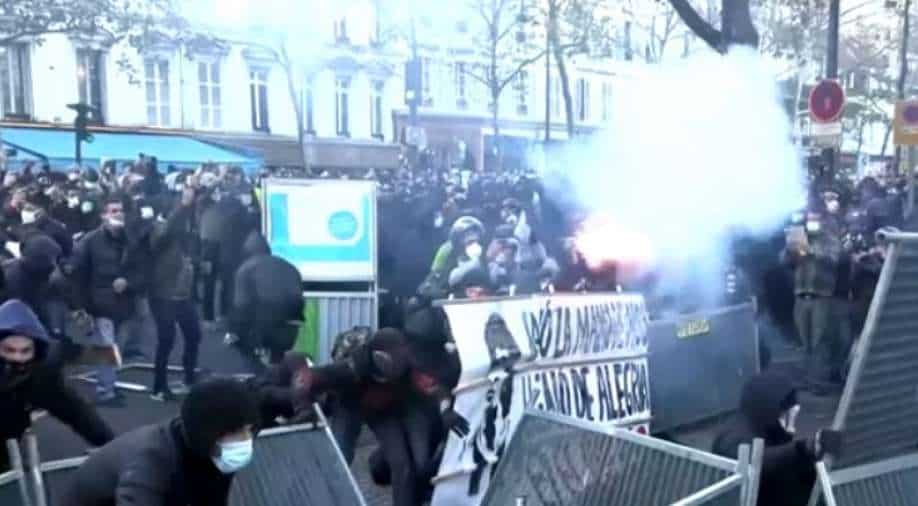 The demonstrators have been protesting against the new security law which restricts the right of the press to broadcast images of police officers in action.

Police in France fired tear gas shells at protesters who were demonstrating against police violence in Paris.

People demanding free press took out protests in France as anger boiled into the streets as police beating of a Black music producer riled citizens.

The demonstrators have been protesting against the new security law which restricts the right of the press to broadcast images of police officers in action.

People filled the Place de la Republique in Paris amid the coronavirus pandemic. President Emmanuel Macron had earlier said that the images of the beating of black music producer Michel Zecler "shame us" calling it an  "unacceptable attack". The police have meanwhile opened an investigation against four officers.

The protesters marched from Place de la Republique to Place de la Bastille as public anger boiled over. In an attempt to cool tempers, PM Jean Castex had said that he would appoint a commission to redraft Article 24 but backtraced after Speaker Richard Ferrand accused the prime minister of overriding the parliament.

The demonstrators have been calling for Article 24 to be withdrawn asserting that goes against the fundamental public freedom of the Republic.

In more headache for the Macron government, reports say trade unions and yellow vest protesters are also expected to join the protests as people in Toulouse demonstrated on Friday against police brutality.