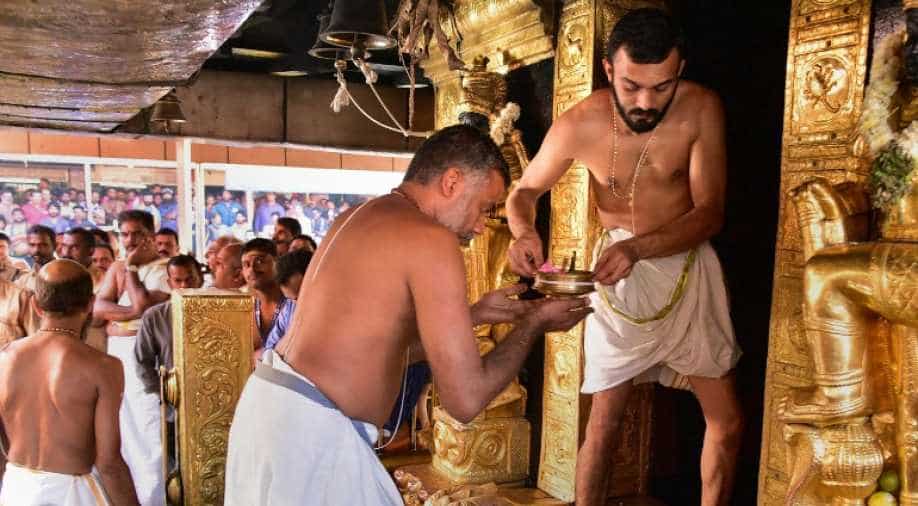 Though the annual Makaravilakku was held here on January 15, the hill top temple, nestled in a reserve forest in the Western Ghats, was open for devotees to offer worship till Monday evening.

After a peaceful Mandalam-Makaravilakku pilgrimage season of over two-months, the portals of the Lord Ayyappa Temple here were closed after performing customary rituals and pujas on Tuesday.

Though the annual Makaravilakku was held here on January 15, the hill top temple, nestled in a reserve forest in the Western Ghats, was open for devotees to offer worship till Monday evening.

Even the last day of the pilgrimage witnessed heavy rush of devotees, including those from neighbouring states, at the Sannidhanam (temple complex), sources at the Travancore Devaswom Board (TDB), the apex temple body, which manages the shrine, said.

Customary rites like "aashtadrvya mahaganapathi homam', 'abhishekam' and 'usha nivedyam', were performed under the aegis of tantri (head priest) Mahesh Mohanaru in the early hours of Tuesday.

Per the tradition, the royal designate of the Pandalam Palace, where according to legend Lord Ayyappa had spent his childhood, offered prayers before the sanctum sanctorum.

He later led the procession carrying the sacred jewels 'thiruvabharanam', brought here to be adorned on Lord Ayyappa on the day of Makaravilakku, back to the Palace.

Melsanthi (chief priest), A K Sudheer Namboothiri performed the 'bhasmabhishekam', the offering of holy ash, on the idol of the Lord Ayyappa and closed the doors of the sanctum sanctorum singing 'harivarasanam', the sacred lullaby, marking the culmination of over 60-day pilgrimage season.

The hillock temple would be opened on February 13 for monthly pooja and would receive devotees for the next five days. The shrine, which draws devotees from various parts of the country, had witnessed unprecedented protests by right-wing outfits and BJP workers last year after the CPI(M)-led LDF government decided to implement the September 28, 2018, Supreme Court order lifting the traditional ban on women and girls in menstrual age from offering prayers.

However, this year, against the backdrop of the top court's decision to refer a batch of review pleas against its earlier verdict to a larger bench, the state government had said those women desirous of visiting the hill temple should get a "court order" and it would not encourage activism.

During this season, some young women who came to Sabarimala were not allowed by authorities to trek to the Ayyappa temple.