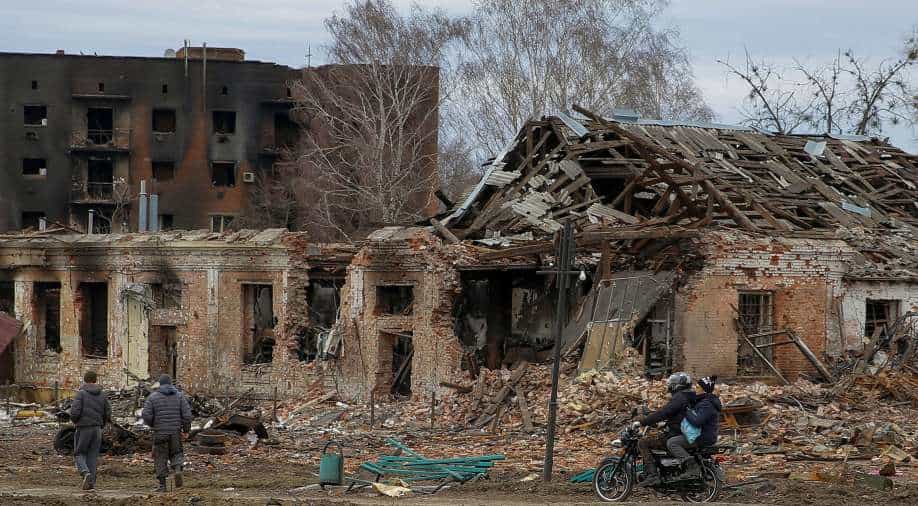 Damaged buildings after Russian shelling in the town of Trostianets in Sumy region, Ukraine Photograph:( Reuters )

Ukrainian authorities added that Russian forces bombarded the northern city of Chernigiv despite the talks in Istanbul.

A day after talks between Ukraine and Russia in Istanbul, Ukrainian officials said Russian airstrikes hit a Red Cross building in Mariupol even has thousands of people remained trapped in the city with food, water and electricity running low.

On Wednesday, the Kremlin said: "We cannot state that there was anything too promising or any breakthroughs" on the talks while adding that Ukraine's demands in writing was a "positive" development.

Ukrainian authorities however added that Russian forces bombarded the northern city of Chernigiv despite the talks. Officials in Chernigiv said Russian shelling continued throughout the night.

Russia had promised to reduce attacks near Kyiv during the peace talks as both sides said the meeting was "meaningful" and "positive". The Pentagon however cast doubts on Russia's intentions saying that Russian forces remained around Kyiv and could be preparing a "major offensive" elsewhere.

"Russia has failed in its objective of capturing Kyiv," the Pentagon spokesman said while warning that "it does not mean that the threat to Kyiv is over".

Ukrainian President Volodymyr Zelensky echoed similar views while asserting that his forces will not drop their defences although he said the talks were "positive". The president claimed at least 20,000 people may have been killed in the war.

Also Read: Ukraine war: What Panzerfaust 3 weapons can do against Russian tanks

US President Joe Biden emphasised on "follow through" by the Russians, even Poland urged the European Union to impose a tax on Russian hydrocarbon imports amid tough Western sanctions already in place against Putin's regime.