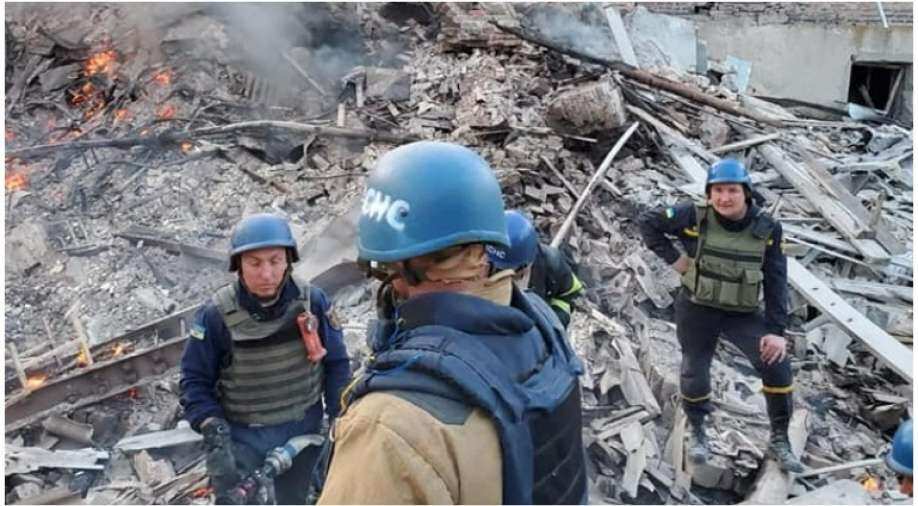 Emergency crew stands around near burning debris, after a school building was hit as a result of shelling, in the village of Bilohorivka, Luhansk, Ukraine, May 7, 2022 Photograph:( Reuters )

About 90 people were sheltering in the school building when Russian bombing destroyed the building. Thirty people have been rescued till now

Russian bombing of a school in Ukraine's village of Bilohorivka has claim two lives and 60 trapped in the debris are feared dead, said Serhiy Gaidai, governor of the Luhansk region.

The governor said that Russia dropped a bomb on the school on Saturday afternoon. About 90 people were sheltering in the school. The bombing caused a fire in the building. Thirty people have been rescued.

"The fire was extinguished after nearly four hours, then the rubble was cleared, and, unfortunately, the bodies of two people were found," Gaidai wrote on wrote in a post on the Telegram messaging app. "Sixty people were likely to have died under the rubble of buildings."

Separately, Gaidai said that according to preliminary information, shelling in the village of Shypilovo destroyed a house and 11 people remained under the building's debris.

News agency Reuters said that it could not immediately verify the reports.

Meanwhile, Ukrainian President Volodymyr Zelensky has said that over 300 people (civilians) have been evacuated from Mariupol steel plant. Ukrainian soldiers are still holed-up inside the Azovstal steel factory. It is the last pocket of Ukrainian resistance in the key port city. Russia has already declared that Mariupol is under its control.