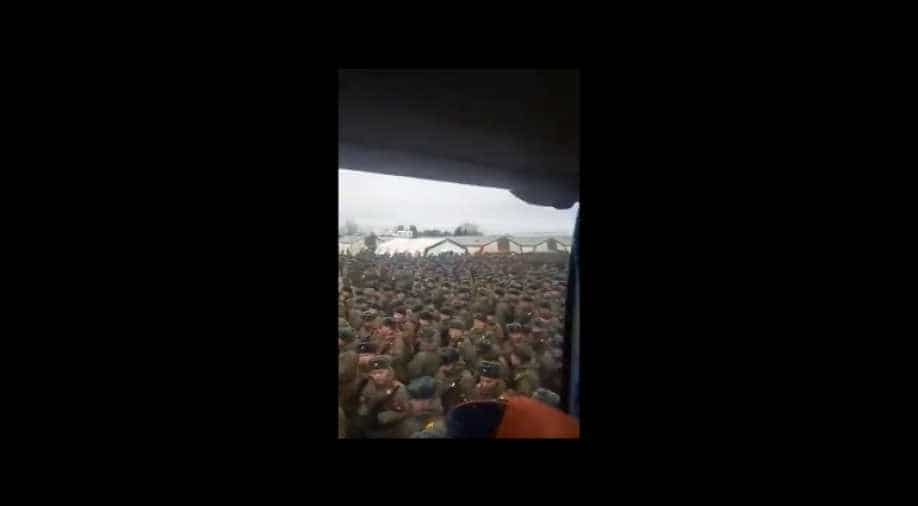 Russian troops standing for preparation of Victory Day Photograph:( Others )

At a time when concerns over a massive surge in coronavirus outbreak remain, Russia continued holding rehearsals for its Victory Day parade.

Russia's coronavirus tally so far stands at 6,342, a rise of 954 cases in the last 24 hours, its crisis response centre said on Monday. At least 47 people have died due to coronavirus in Russia.

The Victory Day parade is scheduled for May 9 and France President Emmanuel Macron is amongst the world leaders who have been invited to mark the 75th anniversary of the end of second world war.

The event holds significance for the Russian president who currently faces isolation largely by the West.

However, the preparations could worsen the COVID-19 situation in Moscow as the city remains the epicentre of the outbreak with 591 new cases.

Moscow is under lockdown since last week and many regions across the country have adopted similar measures to curb the spread.

In an online video, nearly 15,000 soldiers are seen present inside a parade ground outside Moscow, where Russia's defence ministry earlier confirmed it is organising rehearsals for the event.

A new website was censured over claims of violating regulations of fake news after it reported that the parade might be cancelled in one Russian region due to COVID-19.

“May 9th is a sacred date for millions upon millions in Russia and CIS countries,” a foreign ministry handle wrote on Twitter.

“The Victory Day parade is scheduled (sanitary measures taken) and will march on Red Square.”

Victory Day is one of the most important events in Russia and the Western nations have given it a miss since 2014 after Russia annexed Crimea. The distances grew even more after Moscow's alleged meddling in the US elections and the poisoning of Russian intel officer Sergei Skripal in 2018 in Salisbury in the UK.