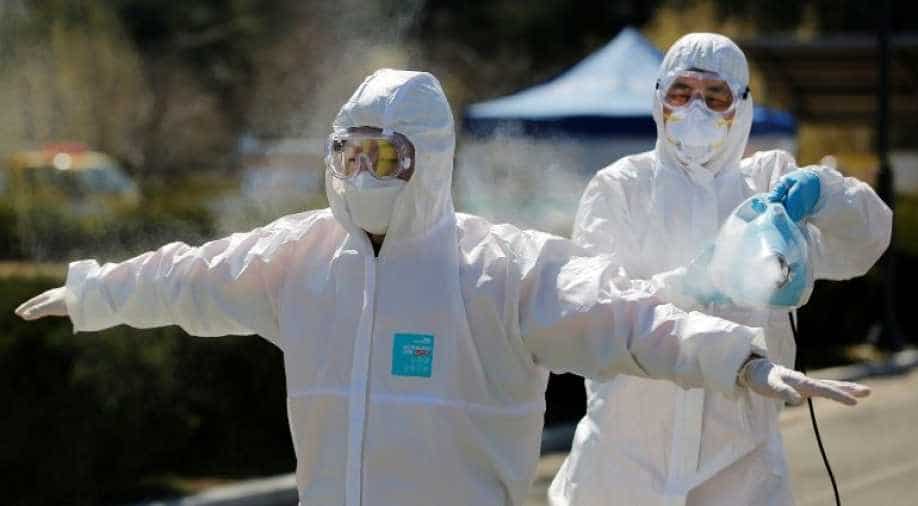 A quarantine worker sprays disinfectants on an ambulance worker of the 119 rescue team, who went on his duty amid the rise in confirmed cases of coronavirus disease (COVID-19) in Daegu, South Korea, March 14, 2020. Photograph:( Reuters )

The World Health Organization (WHO) praised South Korea for its response to the coronavirus outbreak as the country on Monday reported fewer than 50 positive cases for the first time since the outbreak escalated in mid-February.

There were 47 new infections as of midnight on Sunday compared with 81 reported a day earlier, taking the total cases to 10,284, the Korea Centers for Disease Control and Prevention (KCDC) said.

As many as 6,598 people have recovered from COVID-19 in the country.

Moon said in the phone call that South Korea was "willing to actively support other countries with prevention skills and supplies as the circumstances permit".

In February, South Korea faced the worst coronavirus outbreak after mainland China when the virus's reach was limited to a few countries.

However, the country focussed on mass testing and contact tracing and then provided them good treatment, which resulted in a lower death rate.

After witnessing the peak of daily infection tally with 909 cases on February 29, in the last one month, South Korea reported 100 or fewer daily cases.

The Blue House also said that the WHO director-general urged South Korea to provide test kits and other medical supplies to sub-Saharan countries.

Despite South Korea's impressive effort, officials have still urged for greater vigilance, warning that a large outbreak could strike back.

"We are taking great caution against any optimistic expectations with this one-off figure," Vice Health Minister Kim Gang-lip said in a regular briefing.