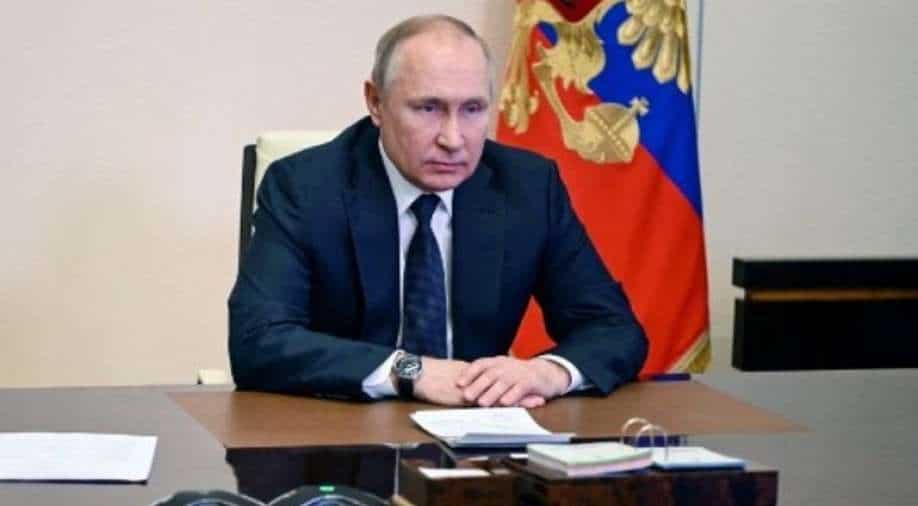 Since Russia's invasion of Ukraine, hundreds of tankers and bulk carriers have been diverted away from the Black Sea, while dozens more have been stranded at ports and at sea unable to unload their valuable cargoes. Photograph:( AFP )

Russian lawmakers moved Friday to impose harsh jail terms for publishing "fake news" about the army, which a senior lawmaker said will apply to foreigners too, as Moscow moves to muffle dissent over its invasion of Ukraine.

The new legislation sets out jail terms of varying lengths and fines against people who publish "knowingly false information" about the military.

"If the fakes led to serious consequences, (the legislation) threatens imprisonment of up to 15 years," the lower house of parliament said in a statement.

Speaking at the session, the head of the head of the parliament's information committee Alexander Khinshtein said the law "concerns all citizens, not only Russian ones, because we are talking about actions against Russia."

Amendments were also passed to fine or jail  people calling for sanctions against Russia with jail terms.

The past year has seen an unprecedented crackdown on independent and critical voices in Russia that has intensified since the invasion.

The chairman of parliament Vyacheslav Volodin railed against foreign social media after Facebook was briefly inaccessible in Russia on Friday.

"All these IT companies beginning with Instagram, and ending with the others, are based in the United States of America. It is clear they are used as weapons. They carry hatred and lies. We need to oppose this," he said.

Russia's media watchdog said Friday it had restricted access to the BBC and other independent media websites, further tightening controls over the internet.

Roskomnadzor said in each case, the request was filed on February 24, the day Russian President Vladimir Putin launched his attack on Ukraine.

Valery Fadeyev, the head of the Kremlin's human rights council accused Western media of being behind "a huge flow of false information that comes from Ukraine" and said the council had set up a project to stop it.

In another attack on critical voices, Russian police on Friday were carrying out searches at the office of the country's most prominent rights group, Memorial, which was ordered to close late last year, sparking international outcry.

Russia's invasion has already claimed hundreds of lives, displaced more than a million people and spurred allegations of war crimes.

Western-led sanctions levelled against Russia in retaliation have sent the ruble into free-fall forcing the central bank to impose a 30-percent tax on sales of hard currency after a run on lenders.

Moscow has few economic tools with which to respond but the Duma, or lower house, on Friday adopted a bill that would freeze any assets inside Russia of foreigners "violating rights of Russians".

Russian media have been instructed to publish only information provided by official sources, which describe the invasion as a military operation.

State-controlled broadcasters have meanwhile reinforced government narratives about nationalism in Ukraine and Moscow's claim that Ukrainian soldiers are using civilians as human shields.

For the moment, it appears the invasion has marked the beginning of the end for what remains of Russia's independent media.

Ekho Mosvky -- a liberal-leaning radio station majority-owned by Russia's energy giant Gazprom -- said Thursday it would shut down after being taken off air over its Ukraine war coverage.

Authorities had on Monday blocked the Ekho website and took the station off air as punishment for spreading "deliberately false information" about the conflict.

Watch | Gravitas: Why Asia is not interested in Russia-Ukraine war

Another independent outlet, Znak, said Friday it was ceasing work "due to the large number of restrictions that have recently appeared for the work of the media in Russia".

The BBC said this week that the audience of its Russian language news website had "more than tripled...with a record reach of 10.7 million people in the last week".

In a Friday response to the blocking, a BBC spokesperson said the company will "continue our efforts to make BBC News available in Russia, and across the rest of the world" despite the restrictions.