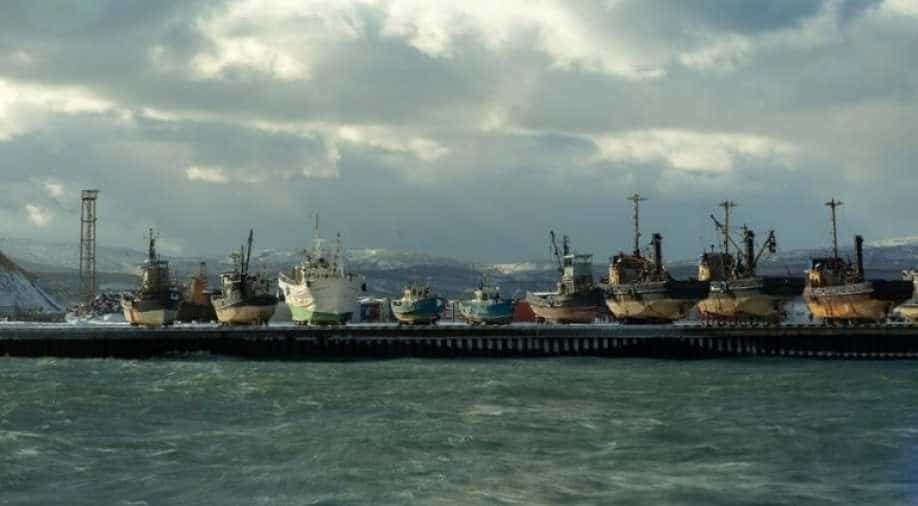 File Photo: Boats on dry dock at the harbour outside the town of Kurilsk on the island of Iturup, in the Kuril Islands Photograph:( AFP )

The Kuril islands is a deeply contested region between Japan and Russia. The dispute goes back to World War II.

According to Russia's TASS news agency, Russia plans to build 51 more pieces of military infrastructure on the Kuril islands.

Russia has reportedly erected more than 30 buildings on the islands even as it is locked in a territorial dispute with Japan.

Last month Russian Prime Minister Mikhail Mishustin had visited the Kuril islands and had declared that the country wanted to open free trade zone(FRZ) leading to protests in Japan.

Mishustin was on a tour to Russia’s Far East and Siberia with the Kuril Islands being his first stop.

The islands were seized by Soviet troops at the end of World War II. The two countries haven't signed a peace treaty since then calling an end to hostilities.

The Russian prime minister during his visit had proposed exempting the islands from customs duty and reducing taxes for businesses as the Japanese foreign ministry protested against Mishustin's visit.

However,  Kremlin said PM Mishustin visits regions "as he sees fit". Three years ago President Vladimir Putin had suggested that Russia and Japan should sign a peace treaty but it wasn't welcomed by Japanese officials who said the two countries should resolve the dispute first.

Japan claims the islands naming it as northern territory which includes four southernmost islands including other islands Iturup and Kunashir.

According to Japanese media, the ruling Liberal Democratic Party were in favour of an early meeting between President Putin and PM Yoshihide Suga after Mishustin’s recent trip.

"It is necessary to declare to the Russian side that we not only protest but are overwhelmed with fury, as well as to clearly point to the inadmissibility of what happened," the head of the party’s Committee on Territories Yoshitaka Shindo said as Japan's foreign ministry summoned Russian ambassador Mikhail Galuzin.